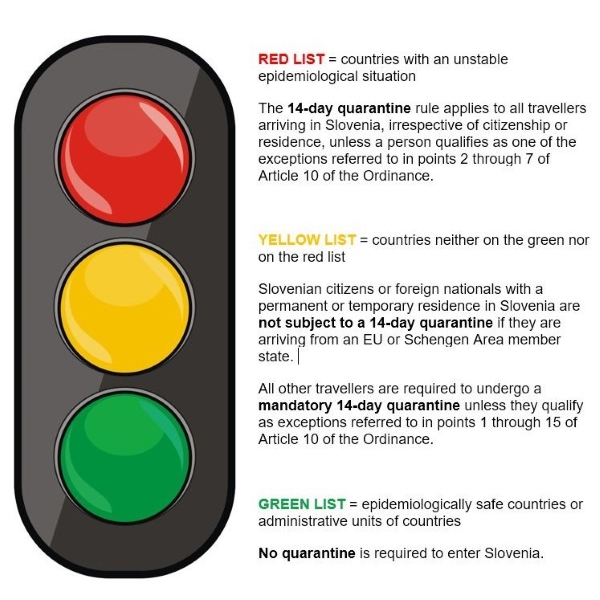 Slovenia has removed the Czech Republic from its green list of safe countries and put it on its yellow list of less safe countries.

Starting Saturday, Czechs will have to quarantine upon arrival for 14 days, unless they can provide proof of residence and a negative COVID-19 test taken within the last 36 hours.

The Czech government believes that Slovenia’s decision is not objective. Apart from Karviná, the epidemiological situation in the Czech Republic is calm.

Foreign Minister Tomáš Petříček told reporters that nothing has changed for Czech citizens who are already in Slovenia. However, Czechs who arrive in Slovenia after midnight will have to provide a negative coronavirus test. Without a negative test, they will have to undergo a two-week quarantine.

Czech diplomacy says this is a significant complication and wants to discuss with Slovenia whether Czechs can take the test in Slovenia.

Slovenia decides to classify a country as safe, based on the number of new coronavirus infections in the last 14 days. In the Czech Republic, as of Thursday, it was 17.75 people per 100,000 inhabitants. The last time the Czechia was below ten was on 25 June.

Czechs will not have to submit a negative test for coronavirus when traveling through Slovenia destined for another country. However, their trip faces delays due to police checks, and traffic complications may also arise at the Slovenian-Croatian border. Petříček recommends Czech tourists make the crossing as quickly as possible if they plan to travel through Slovenia.

Prime Minister Andrej Babiš told reporters that there was no reason for Slovenia to place the Czechia among less secure countries. Babis says the Czech Republic only has a problem in the Karviná region. “Let us hope that Slovenia takes this into account and abandons the measure because there is not the slightest reason for it,” he said. According to Babiš, the Slovenian counterpart Janez Janša promised to check the situation.

The Minister of Health Adam Vojtěch says Slovenia does not assess the domestic epidemiological situation objectively or in detail. “The total data on the number of cases are being compared. We want to convince our Slovenian colleagues that the situation in the Czech Republic is not so widespread. The trend is rather declining,” the minister said. According to him, the outbreak in Karviná is under control.

The Association of Czech Travel Agencies says the Slovenian move is a blow to tourism. The association called on the foreign ministry to negotiate mitigation measures.

Czechia found itself on Slovenia’s list of less safe states on the so-called orange along with Croatia and France.