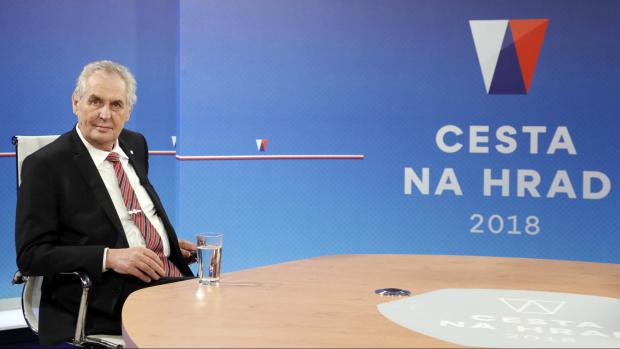 A total of nine times, President Milos Zeman argued in Sunday’s Road to Castle debate with false statements, another ten were misleading. Zeman’s argument was true in eleven cases. The Demagog.cz site found.

President Milos Zeman presented the Nova TV viewers in the Road to Castle debate before the upcoming second round of the presidential election. Candidate Jiří Drahoš refused the invitation due to scheduling issues, so the current head of state talked with moderator Rey Koranteng. According to Demagog.cz, he lied, a lot.

Altogether, Zeman lied nine times, his assertion was misleading ten times, in two cases the truth could not be verified. Which leaves eleven cases in which he told the truth.

False, for example was the claim that the government of Mirek Topolanek ruled in resignation five months. This period was only three months long. He also said that he stopped supporting the euro after the Greek debt crisis began. But even this is not true, it supports him for a long time. Last time last June, he claimed that his acceptance was hampered only by the Czechs’ mental barrier.

Zeman was also mistaken in how much Sweden has a population. He does not have seven million, he said, but more than ten. He also spoke falsely about an article by a Russian journalist called Czechoslovakia, the Soviet Union should be grateful for 1968: The History of Prague Spring. Not only did he mention the name of another periodical (or website) rather than the article in which the article was published, but his claim was that the author had been thrown out, that another article celebrating the Prague Spring or that Prime Minister Medvedev had apologized for the article.

On the contrary, his statements were true that, for the time he was head of the CSSD, the party ran out of seven to 32%, or that Rusnok’s government lacked a few votes to gain confidence. He also rightly said that he was negotiating L-410 delivery in China, supported a direct election of mayors, mayors and governors, and a referendum law. The truth is that none of his closest associates is prosecuted, accused, and tried.

Among the misleading statements of Demagog.cz he included, for example, the claim that Zeman, as prime minister, led the Czech Republic in 1999 to NATO. The truth is that the decision to join NATO was approved by Parliament a few months before Zeman became prime minister. It was also inaccurate that Zeman in Moscow signed a deal to supply 6,000 Zetor tractors for four years. The truth is that only a memorandum has been signed, according to which such a trade should take place.