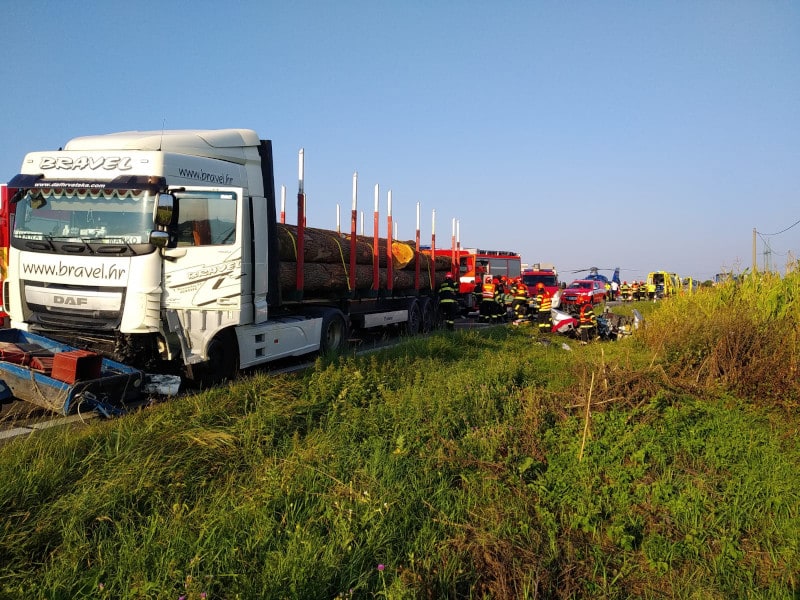 A passenger car and a truck collided head-on near the Strážnice Region in the Hodonín Region this morning. Two people died in an accident, and another is in critical condition. The road was closed on the spot for about eight hours.

The accident happened on road number 55 between Strážnice and the village of Vnorovy around 7:30. “The driver of the Škoda Fabia was driving towards Strážnice and, according to the information obtained so far, he drove into the opposite lane while cornering. Behind the centerline, there was a collision with an oncoming truck carrying logs,” said Zámečník.

After the collision, the car ended up next to the road, killing an 82-year-old driver and a 55-year-old co-driver. The third man from the crew (66 years old) was airlifted to the hospital by rescuers with serious injuries. “The driver of the truck, who was sober according to the breath test, did not suffer any injuries in the accident,” said Zámečník.

A rescue helicopter intervened on the spot. “Two people died before the arrival of rescuers. One patient was airlifted to the University Hospital Brno’s emergency reception – Bohunice in the controlled condition in critical condition,” said rescue spokeswoman Michaela Bothová.

The detour route led through Bzenec and Veselí nad Moravou. The road was closed until about 16:00, after which the place was by shuttle.

In the same section, two passenger cars collided head-on in 2017, when four people, including the culprit, died. According to the expert opinion, the young driver could not make the turn due to excessive speed and drove in the opposite direction.