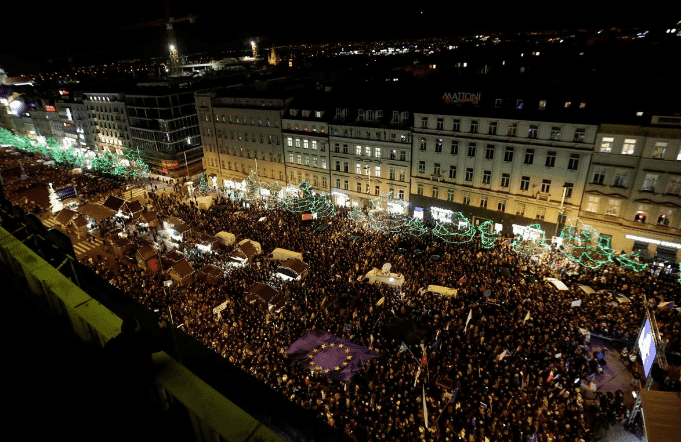 Thousands protested against Prime Minister Andrej Babis on Tuesday in Prague at a rally organized by Million Moments for Democracy.

Speakers at the protest in Prague by the Million Moments for Democracy civic group demanded Babis’s former business empire Agrofert be cut off from European Union subsidies and public contracts, and they called on Babis to resign.

Tuesday’s protest was called after the country’s top prosecutor reopened last week a case against Babis, suspecting that he hid ownership of one of his firms a decade ago so it would qualify for a 2 million euro subsidy.

Separately, an audit by the European Commission, the European Union’s executive, leaked to Czech media last week, showed the Commission saw Babis in conflict of interest because he still had control over Agrofert, a conglomerate of hundreds of firms he had built over the past two decades and put into trust funds in 2017.

Babis, 65 and in power since 2017, denies any wrongdoing in the criminal case and also repeatedly said he met all legal requirements on conflict of interest by setting up the fund structure.

The protest group, set up by students, had brought a quarter of a million people to the streets in Prague twice earlier this year in the biggest demonstrations of the country’s 30-year post-communist era.

The protest on Tuesday at Prague’s central Wenceslas Square was smaller, numbering several tens of thousands according to a Reuters’ estimate, and 60,000 according to the organizers.

“A liar under investigation has no business being in the post of prime minister,” Benjamin Roll from Million Moments for Democracy told the crowd.

Despite the protests, Babis’s populist ANO movement remains by far the most popular political party with around 30 percent of the vote, drawing support among older voters and regions outside the capital.

His firms span farming, food processing, chemicals and media, and are among the central European country’s main recipients of various EU money, from farm subsidies that are given per hectare or per animal to project-based finance for innovation and environmental investments.