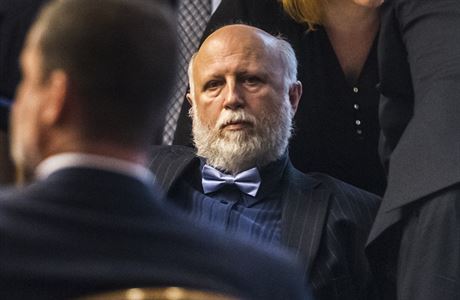 The court granted businessman Peter Kmet’s request for early release from prison. Kmet is serving a three-year sentence for stealing profits from the Oleo Chemical company. According to the judge, the business partner of lobbyist Ivo Rittig and a former State Security agent fulfilled all legal conditions for parole. Given the presumption of innocence, it cannot be considered that he is facing two other charges. Today’s decision is not final. The public prosecutor immediately filed a complaint against it.

Kmet has already served two-thirds of his sentence. “He is serving his sentence for the first time, and it can be believed that his experience from the prison will lead him to live a proper life in the future,” said Vítězslav Rašík, a judge of the District Court for Prague 4. He set a five-year probationary period for Kmeť, during which he had to prove with his due life that he deserved his early release.

Sixty-three-year-old Kmeť is also charged in the case of tickets for a Prague transport company. Today, it turned out that he was also affected by the accusation of embezzlement, which is related to the lease of space in the subway. In all cases, Kmeť’s Caribbean company Cokeville Assets (CA) is involved.

The prosecutor appealed to the judge not to release the man. “He undoubtedly had high profits from crime. The risk of his escape cannot be overlooked. He has enormous funds and contacts at his disposal,” he warned.

“I don’t understand what’s going on around me at all. I don’t know if I can improve anymore. I just wish to die with dignity. I will continue to fight against the brotherhood of prosecutors and prove my innocence,” Kmeť responded emotionally to this warning.

Due to the public prosecutor’s complaint, the entrepreneur will remain behind bars for the time being, and the Prague City Court will consider his application.

Kmeť, who holds the title of Doctor of Laws, stated in his application for release that he entered Pankrác Prison in August 2018 “humbly, properly and in time.” He regularly attended Mass there and learned Spanish. He did not work behind bars for health reasons. After his release, according to his own words, he plans to return to his house in the Vysočina region, where he also negotiated a job as the complex administrator. He also wants to take care of his first-born grandson.

He also wrote that he “critically evaluated his business,” resigned from the director of CA’s position, and liquidated the company. But he insists that CA was “as transparent” as his Czech companies. The prosecutor noted that Kmet found a persistent lack of self-reflection, sarcasm, and guilt.

In the Oleo Chemical case, Kmeť was punished for breach of duty in the administration of third-party property. Justice concluded that the consulting contract between his CA and Ole was fictitious and allowed the petition to be withdrawn from the petrochemical company. The company’s shareholders thus suffered almost 20 million in damage.

In addition to the three-year imprisonment, the courts also imposed on Kmeť a fine of one million crowns, which he had already paid. He sought parole a year ago but then failed.

Mr. Kmet denies guilt in the case and appealed to the Supreme Court, which has not yet heard the case. The man also denied criminal activity in the case of a transport company. He admits that his company CA received 17 pennies from each ticket made by Neograph paper. According to him, it was a reward for arranging the contract, not a tunnel for Neograph. He did not comment on the accusation’s claim that the money then went to Rittig via CA.