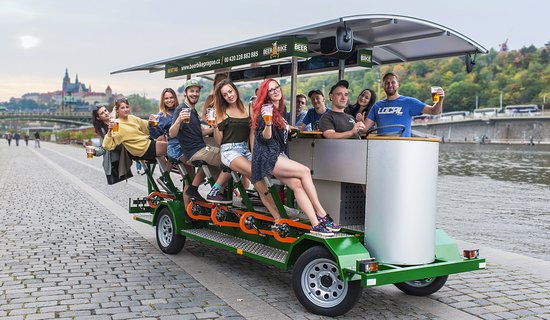 On Saturday, the ban on beer bikes will expire in Prague. The court overturned the original measure of the municipality, and the temporary ban imposed by the city will expire.

The action for the measure was brought by several companies that were in some way affected by the ban. The court ruled in May that the municipality should not have decided on the ban. According to the Statute of the Capital City, it is to issue traffic measures only on first-class roads, while the prohibition of beer bikes mainly concerned lower roads.

“The Municipal Court is aware that this interpretation is, to some extent, formalistic. However, in this respect, it is a legislative gap in the Statute, which cannot be bridged by a judicial interpretation,” the judgment said. Prague 4 also disagreed with the measure according to the document. The court also stated that “argumentation of the suitability, culture or aesthetics of a given means of transport” does not stand as a reason for similar regulation under the Road Act. According to the court, the municipality did not even sufficiently prove that the carts are noisy and disturb the locals.

The city took a temporary measure after the verdict, which kept the ban in force for another 60 days, but this is not permanent. Deputy Scheinherr sent a letter to the city district informing them of the measure’s expiry, even though it did not mention the lost court. He cites the “negative attitude of some city districts” as the reason for lifting the ban. The letter states August 15 as the deadline for revoking traffic signs.

The deputy also wrote that the city districts are prohibited from approving each one separately in coordination with a measure of the municipality, which will, per the case law, concern first-class roads. “At the same time, I recommend that you agree in advance with the individual operators of these beer bikes, the so-called beer bikes, on the measures you have planned, to eliminate possible future litigation,” Scheinherr wrote.

The ban was approved by the municipality last year, after which an unsuccessful complaint delayed its validity to the Ministry of Transport from the Czech family mini-brewery Gwern, which supplies many beer bicycles. This company is also one of those that have successfully filed a lawsuit against the measure. The signs were started by the Technical Administration of Roads installation in February.

Beer bikes are among several tourist attractions that residents of the city center have been complaining about in recent years. In the past, the municipality achieved a ban on Segway vehicles through a change in the law. The restriction of so-called electric scooters, more reminiscent of mopeds or bicycles in some pedestrian zones, was also addressed. The problem with beer wheels also affected other European capitals, such as Amsterdam, which was banned the year before.