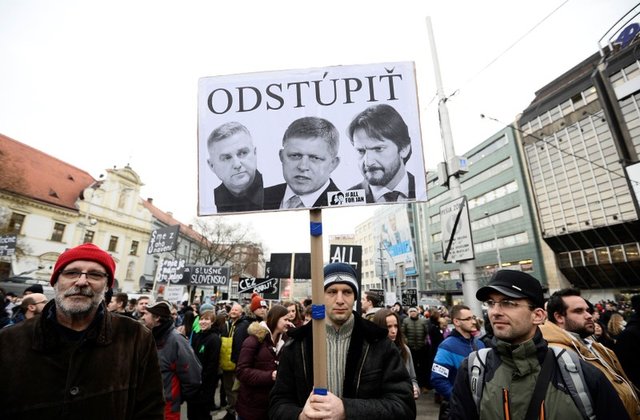 After two years, the third government of Prime Minister Robert Fico comes to an ends. On Wednesday evening, when the Slovaks were preparing to go early to the elections, the government coalition caught up with the announcement that it had agreed to a major reconstruction of the government.  Fico, chairman of the strongest party, will resign as prime minister.

This is agreed by even the smallest coalition party Most-Hid, which agreed on Monday to support early elections. On Wednesday, however, her leadership changed their minds.

Following the decision of the parties to maintain the current government, the results of the first public opinion polls since the beginning of the crisis may be due to the murder of journalist Ján Kuciak and his girlfriend. According to Focus by Fic, Direction gained only 20 percent of the vote, five more months ago. Most-Hid would thus slip into Parliament with 5.6 percent. On the contrary, the third government formation, the Slovak National Party, would increase by one percent to 14 percent. Fascists Marian Kotleby, more or less the opposition Democratic Party, would also gain more.

“This decision can bring peace to the situation. The new government, it is a new responsibility and a continuation of what we started two years ago,” explained Béla Bugar, head of Most.

The opposition was preparing a special parliamentary session on Monday for a vote of no confidence towards Fico. He has overtaken her because, as a prime minister, who will resign himself, he will have greater powers than if somehow the fragmented opposition succeeded in gaining enough votes to express distrust to the Prime Minister and thus to the entire government.

Fico has given several resignations for his resignation, which he communicated to President Kiska in the evening. The head of state must respect the results of the 2016 elections won by Fic’s Social Democracy Party and the current coalition agreement. In addition, Fico wants the new Prime Minister to design his Direction. Evening evening We have said that the most likely Prime Minister will be Vice-Chairman of the Direction Peter Pellegrini.

Journal N wrote that the new government will maintain the number of ministers, and the division of ministries between coalition partners will remain the same. Changes on posters are not yet known. What is certain is that Lucia Zitnanska, the Minister of Justice, will not be respected in the reconstructed government. This, with the support of President Kiska, attempted a reform of the judiciary to restore the confidence of the Slovaks in justice, lost during the previous Fico governments.

President Kiska has yet to comment on the possible reconstruction of the government, just canceling his Thursday program in Banská Bystrica.

The celebrations of Fico’s opponents at the end of the ten-year rule of the boss are premature. The Prime Minister and his party will not give up. It is to be expected that the planned Friday demonstrations demanding the demise of the government will be as strong as last week, when tens of thousands of Slovaks in the city streets demanding the departure of Fico from the head of the government. Therefore, the Premier’s demise may not be enough – as did the situation, Fico’s right hand, Interior Minister Robert Kaliňák, has not been canceled.

The Slovak police have not gone far enough to investigate the murder of a journalist and his fiancée which is considered political. Journalist Ján Kuciak linked the government with the Italian Mafia.