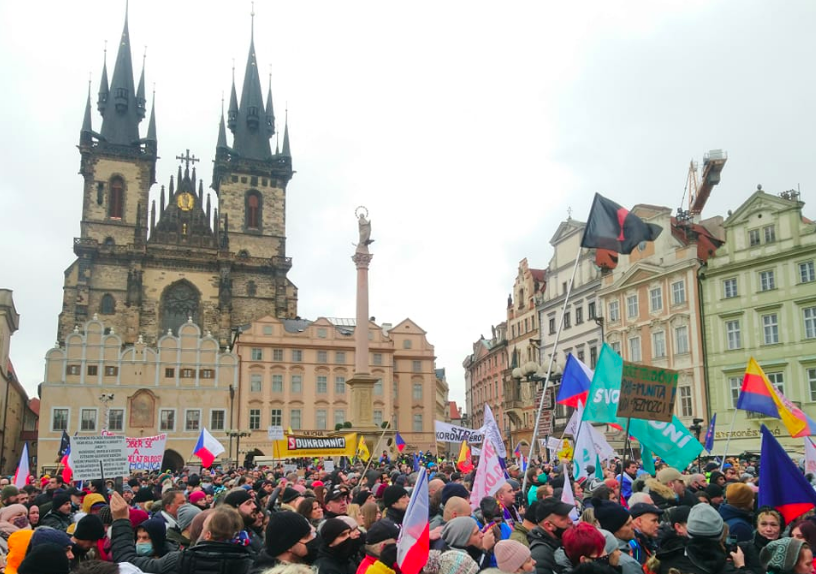 Hundreds of people have been demonstrating in Prague’s Lesser Town Square since the morning over anti-coronavirus measures and covid certificates. The protests are organized by the Wanted PES and Free Bloc movements. At the same time, trumpet cars with Czech flags passed around the square, and some trams had to stop for a while due to traffic.

Protesters hold flags in particular, and some have banners pointing out, for example, that schools have been closed for a long time due to coronavirus. The Czech and Slovak anthems were played. Dozens of police officers and members of the anti-conflict team are watching the demonstration.

At around 3.30 pm, the relatively full Malostranské náměstí watched the projection of the Chamber’s deliberations, which deals with the amendment to the Public Health Protection Act, which should set out the legal framework for issuing certificates. During the speech of the Minister of Health Adam Vojtěch (for YES), people shouted “Shame!”

Dozens of protesters grouped in front of the barriers at Sněmovní Street, where the situation is being monitored by the police. Protesters started a deafening whistle and trumpets, shouting “We’ve had enough!”

The European Parliament today definitively approved the introduction of so-called covid passports, which should make it easier for people to travel across borders from the beginning of July. Free vaccination certificates, negative tests or illnesses will have to be issued and recognized by all EU countries. According to MEPs, the introduction of certificates will be a crucial step in restoring freedom of movement and will help not only tourists but also cross-border workers and students.

If someone claims that so-called covid passports force someone to be vaccinated, they are misleading the public and not telling the truth, Minister Vojtěch told reporters today. “There are all three options, ie vaccination, testing and disease,” he said. Moreover, the measure serves nothing but travel.

Without the legal authority to issue certificates, there would be a risk that courts would declare the practice illegal. “I will do everything I can to persuade colleagues to vote for it,” he added. According to him, in order for the measure to be successful, the regulation must be discussed in the regime of legislative emergency.