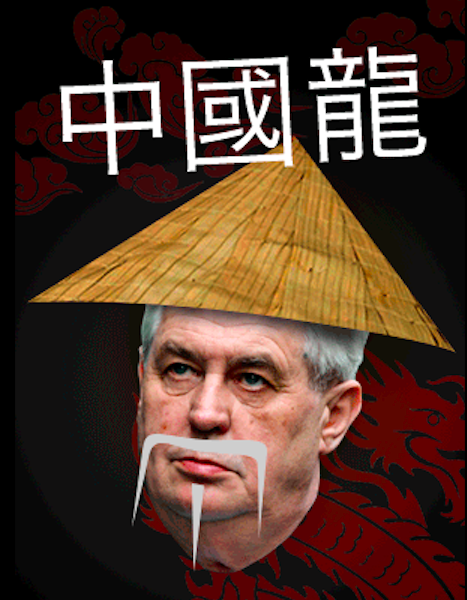 The following column, written by Martin Hála founder and director of Project Sinopsis was first published on CDT

The Chinese energy and finance conglomerate CEFC made headlines internationally in November when Patrick Ho, the General Secretary of its Hong Kong-registered non-profit wing, was arrested in New York and accused of bribing top African politicians on behalf of the corporation. Few have heard of the company before; in some parts of the world, however, notably in the Czech Republic, the company had become notorious long before Ho’s arrest.

CEFC is one of the Chinese companies that appeared in recent years seemingly out of nowhere with loads of cash available for high-profile overseas acquisitions. Most recently, CEFC acquired a 14 percent stake for USD 9 billion in the Russian state-run oil giant Rosneft, sanctioned for its proximity to the Putin regime by both the U.S. and the E.U. CEFC acquisitions, however, are not limited to energy deals; in places like the Czech Republic, it buys everything from sport clubs to TV stations.

In the same fateful year of 2013, the Czech Republic held its first direct presidential elections won (rather closely) by the populist candidate Miloš Zeman. Zeman was brought back from self-declared retirement after a stint as the Czech PM in 1998 – 2002 by a cabal of political and business interests. In his political life prior to the Presidency, Zeman never showed much interest in China. On one occasion in 1996, he publicly ridiculed those who would be willing to serve any foreigners, even the Chinese, “ready to undergo a plastic surgery to slant their eyes.”

By 2013, he apparently changed his mind, and started pursuing an unconditional reversal of the Czech Foreign Policy towards China, uttering similarly outrageous statements with an exactly opposite spin. His change of heart was directly related to persistent efforts of the biggest Czech financial conglomerate PPF to secure a nationwide license to provide consumer finance services in China. After an initial pilot project in Tianjin in 2010, PPF was told that further progress depended on a more cordial attitude in Prague towards the People’s Republic. PPF set about the task enthusiastically, hiring Zeman’s former defense minister Jaroslav Tvrdík as their chief lobbyist. After Zeman’s election in 2013, Tvrdík became his advisor, as well as the advisor of Zeman’s hand-picked PM in his “care-taking” government that ruled the country for more than half a year without securing the Parliament’s vote of confidence. In 2014, a Czech policy reversal was officially announced during the Czech FM’s visit in Beijing. The very same year, PPF obtained the coveted nationwide license and went on with their very profitable business in China.

The following year, in an apparent response to PPF’s success in China, a hitherto unknown Chinese company CEFC entered the Czech Republic. In the fall of 2015, CEFC went on a weeklong shock-and-awe shopping spree in Prague, buying some prime real-estate, a football club, a brewery, and a media conglomerate. The buying frenzy was advertised as just the beginning of a massive upcoming capital injection into the Czech Republic, a proof of the wisdom of the Czech foreign policy u-turn’s wisdom.

Simultaneously, it was announced that back in the spring CEFC Chairman Ye Jianming had been named Zeman’s advisor. The delay in making the appointment public was never explained, but it follows that before the very visible CEFC acquisitions, making an unknown representative of an unknown foreign company the Czech President’s advisor would have appeared even more outlandish. Interestingly, the appointment was made the same year when Ye Jianming also became the advisor of the former Ugandan FM Sam Kutesa in his capacity of the UNGA President. According to the U.S. indictment against Patrick Ho, the accused CEFC representative then wired Sam Kutesa half a million dollars.

Zeman’s Czech advisor for China and PPF lobbyist Tvrdík became the head of CEFC’s “European” headquarters in Prague. In a somewhat incestous circle, Tvrdík became the central hinge in an informal axis between PPF, CEFC, and the Czech state. CEFC Europe then went on to hire a plethora of former Czech politicians and top government servants. A certain Mr. Sklenář, originally in charge of the protocol at the Prague Castle, distinguished himself by going back and forth through the revolving door between CEFC Europe and the Czech President’s office not once, but twice in three years. The Czech state seems to be fusing with CEFC.

Meanwhile, CEFC‘s economic activities in the Czech Republic proved rather underwhelming, certainly in comparison with their growing political clout. Most of the promised billions never materialized, and the little business there was happened to involve almost exclusively a close-knit group of political entrepreneurs around the Czech President and his advisors.

When the issue of CEFC’s alleged connection to Chinese military intelligence came up in the local press, CEFC instructed its legal representation in the Czech Republic to serve threatening notices to the media concerned. Given the close-knit circle of CEFC associates in the country, it is perhaps not surprising that the law firm representing it happened to be run by the closest friend of the then Czech PM, considered by some observers to be the most influential éminence gris in Prague.

CEFC’s own media assets in the Czech Republic, obtained during the short-lived shopping spree in 2015, diligently promote the “China Story,” a positive narrative called for by CCP’s Secretary General Xi Jinping. According to a recent quantitative analysis, the image of Communist China has been mixed in most Czech media. The only exception were the media outlets co-owned by CEFC, which offered 100 percent positive coverage and didn’t publish a single critical voice.

CEFC is now bidding for the most influential TV channel in the country, TV Nova, in a consortium with the Czecho-Slovak financial group Penta. Penta was created by a group of former classmates from Moscow’s MGIMO Institute, and became notorious in Slovakia through the “Gorilla Affair”, an alleged attempt to influence the Slovak government with regular secret meetings in a private apartment in Bratislava. Official investigation into the scandal has been dragging on for years with no end in sight.

TV Nova is part of the Central European Media Enterprises (CME), currently owned by Time-Warner. Its media assets span several East European countries (Czech Republic, Slovakia, Bulgaria, and Romania). The prospective acquisition of this small media empire apparently does not need any regulatory approvals in either the U.S. or Eastern Europe.