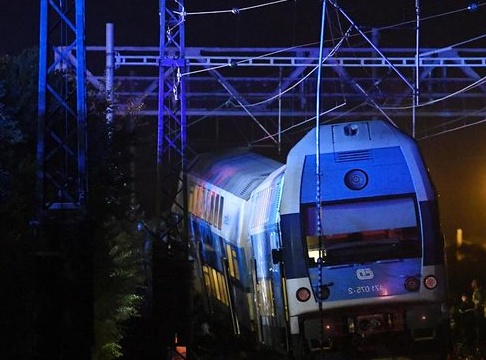 One person was killed and 35 injured when two trains collided Tuesday evening on the mainline from Prague to Kolín.

The Czech Railways CityElefant passenger train heading from Prague to Řečany nad Labem collided on the outskirts of Český Brod with a freight train. After the collision, the passenger train derailed firefighters had to secure it with chains to prevent it from overturning. One of the train drivers did not survive the accident. Firefighters said he was trapped in the cabin.

Transport Minister Karel Havlíček arrived at the scene of the accident last night. According to the minister, the technology probably did not fail. The minister is not considering resigning despite several train accidents in recent days. Havlíček described the 40-year-old driver of a crashed train as experienced. According to him, he was not overworked. The driver just returned from vacation.

Four people were seriously injured, and 31 passengers were slightly injured. They mostly escaped the accident with bruises and minor leg injuries. Among the injured were eight minors. Initial estimates by rescuers spoke of 50 to 60 injured.

Several helicopters were involved in an accident on one of the busiest railway sections in the country. Traffic on the track was stopped, express trains go by diversion through Lysá nad Labem. According to firefighters, the intervention will last until the morning hours. An accident train is heading to the site, which will tear the crashed sets apart.

On the same line between Prague and Kolín on Friday evening near Běchovice, a train without passengers crashed into a waiting express train. No one was injured. The railway inspectors are leaning towards human error as the cause of the accident. According to the previous investigation, human error was behind the collision of two passenger trains on the single-track line near Pernink in the Karlovy Vary region in which two people died last week, and another 24 were injured.

Havlíček wants to convene a team of experts and start addressing the issue of security.