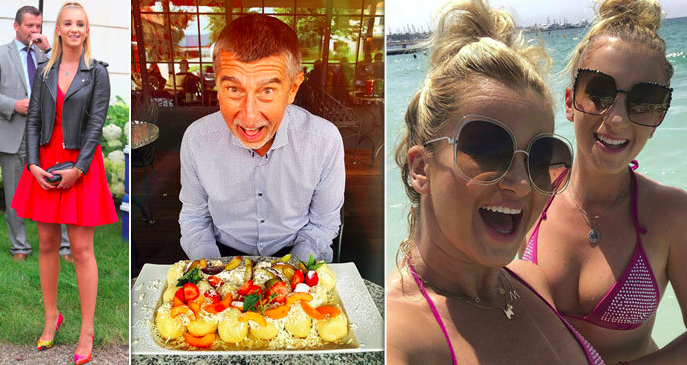 The government remains stuck in a crisis that has already rumbled on for two months, even after a junior coalition partner backed down on an ultimatum that threatened a collapse by the end of the month.

While the imminent risk of a government collapse has receded, the crisis remains.

Despite the crisis, Andrej Babiš and his wife Monika Babiš are celebrating their second wedding anniversary in Greece. The couple celebrated the anniversary early so they could also mark the occasion of Vivien’s 19th birthday. Vivien has been seen tagging along with the PM at several official events recently.

Babis faces criticism that he failed to convince the president to comply with the CSSD. The prime minister will try to come up with other ideas in Greece and also in France, where he owns a restaurant. He is careful to point out that he no longer owns it. “I do not have a restaurant, it is in the trust fund,” says Babiš.

It has been two years since the PM married his partner after twenty-three years of living together. The wedding took place on the Stork’s Nest Farm. Apart from the family, the wedding was attended by some 200 guests. The bride wore a white embroidered wedding dress with bare shoulders. Monika chose the wedding dress on the internet designed by an Israeli designer.

However, the second wedding anniversary was not the only reason for the celebration. “We are commemorating the anniversary today. We’re just having a family lunch. And we celebrate the anniversary with Vivien’s nineteenth birthday.” Babis told reporters.

The prime minister, together with his family, are in Greece “We go to Greece the most. We like it there, the people are pleasant, the food is good, the sea and everything. ‘We’ve been to Elounda before, but we are going to a new place near Heraklion this time” he said.

However, this is not the end of Prime Minister Babiš’s holiday plans. “I really liked it in the Bohemian Forest, so I will try to talk my family into spending a few days there biking and hiking,”. He slept in Kašperské Hory, went to Březník or to the game park with wolves, tackled bark beetles and they said they walked 15 kilometers. Now he would like to return to the Bohemian Forest in his free time before going back to meet the ministers.