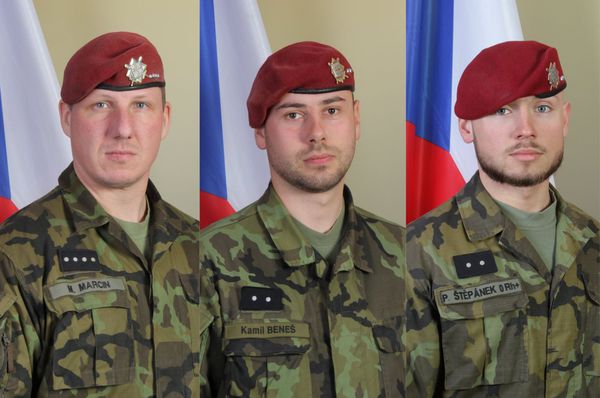 Three Czech service members were killed in eastern Afghanistan on Sunday by a suicide bomber while conducting a joint foot patrol with U.S. and local soldiers. Hailed as heroes by Czech military brass and politicians, the soldiers were serving in Nato’s “Resolute Support” mission, a non-combat mission training and advising the Afghan National Defence and Security Forces.

NATO formally ended its main combat mission against the Taliban in Afghanistan in 2014, but the Islamist group never called off its jihad, and immediately claimed responsibility for Sunday’s attack, promising more to come. Major General Jiří Verner, director of the Czech Army’s joint operations centre, offered his condolences to their grieving families while emphasizing the importance of the mission.

“I would like to stress, as have all representatives of the army and state who have had a chance to officially express their condolences, that for us these soldiers are heroes. They were fighting against terrorism, many thousands of kilometres away from their families. And we consider this fight to be crucial, absolutely essential. I would like to now make the names of these soldiers public: Sergeant Martin Marcin. Corporal Kamil Beneš. Corporal Patrik Štěpánek.”
Sgt. Marcin, the oldest of the three victims at 36, had served in the Czech army since 2003 and been deployed abroad four times, twice with the UN peacekeeping mission in Kosovo, and twice in Afghanistan. He leaves behind a widow and a three-month-old baby. His comrades in arms, aged 28 and 25, were also experienced soldiers, each having been in uniform for nearly five years.
To date, 13 Czech soldiers have been killed in Afghanistan, with the first casualty in 2007. The worst attack, in 2014, claimed five lives. The Czech soldiers killed on Sunday had been patrolling an area about near Bagram Air Base, the largest U.S. base in Afghanistan. About 170 Czech soldiers are now stationed there as part of the 10th A.C.R. Guard Company “to deflect hostile activities against the allied base.”

While a thorough investigation of the attack has yet to be carried out, the mission will continue, says Major General Jiří Verner.

“Despite the tragic events, I am convinced, as is the entire leadership of Czech Army, that we are doing the right thing, in the right place. And this will definitely not deter us from carrying out our actions, as specified in our mandate for 2019 and 2020. I don’t anticipate any re-evaluation of the mission in this respect.”

In total, 230 Czech service members are stationed in Afghanistan as part of NATO’s 16,000-strong Resolute Support mission. This spring, the government approved a plan to deploy another 160 there through 2020, as well and to reinforce the Czech military presence in Iraq and Mali.
About 3,550 coalition troops have died in Afghanistan since the invasion in 2001, including more than 2,200 Americans. So far this year, four Americans and three service members from other coalition countries have been killed.