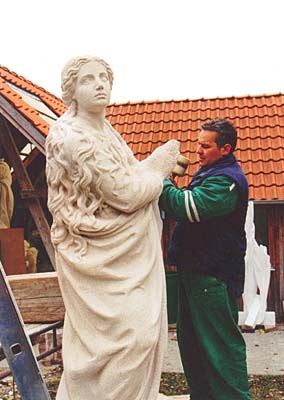 Plans to re-erect a Baroque column with a gilded statue of the Virgin Mary in the centre of Prague have triggered a religious controversy in the Czech Republic, one of Europe’s most atheist countries.

A group of Catholics and Prague history fans hope to erect a replica of the original column — built in the 1650s but torn down in 1918 as a symbol of the Habsburg empire — at its initial site on the city’s central Old Town Square.

“The day the column is re-erected, we’ll know there has been reconciliation,” says sculptor Petr Vana, who carved the replica.

In the past, similar plans were already blocked under both Nazi and Communist rule.

In 1989 — shortly after the fall of Communism — local Catholics and history enthusiasts set up the “Association for the Renewal of the Marian Column.”

Vana told AFP that he had been asked to select the technology and draw up a budget.

“It was then that I came to understand the immense spiritual depth of the project. For me, it’s no ordinary contract,” says Vana, who has spent two decades working on it.

The original 15-metre (49-foot) column, erected in the early 1650s, was topped by a sandstone statue of the Virgin Mary by Baroque sculptor Jan Jiri Bendl.

It commemorated Prague’s defenders against the protestant Swedish army at the end of the Thirty Years War of 1618-1648.

But in the eyes of ordinary Czechs, the column came to symbolise the enforced re-Catholisation by Austria’s Habsburg rulers of a country that venerated the religious reformer Jan Hus, who was burned at the stake as a heretic in 1415.

On November 3, 1918, just days after Czechoslovakia gained independence from the disintegrating Austro-Hungarian empire, a crowd led by anarchist Franta Sauer tore down the column, shouting “Far from Vienna, far from Rome!”

Many Czechs turned their backs on the Catholic Church at that time, and many more did so during the Communist regime of 1948-1989, which depicted the Church as the enemy of the people.

Believers are now a minority in the EU member state of 10.6 million people, where 8.6 million people identified as non-believers or refused to fill in the box marked “religion” in a 2011 census.

“The column was a symbol of religious intolerance,” said one opponent of the project, Jan Vano, during a recent meeting on the Old Town Square.

Zdenek Zacpal, a translator, described the monument as “cynical” because it was erected not far from the spot where 27 leaders of a protestant revolt were executed in June 1621.

He brandished a banner that read: “We don’t want the column of humiliation.”

The association has found itself caught in a bureaucratic trap.

Even though it possesses a building permit — scheduled to expire in July — the municipal authorities argue that the document is merely a general one that does not include permission for construction to begin at a specific site.

And an earlier rejection issued by the previous municipal council in September 2017 was still in force, according to the authority’s spokesman, Vit Hofman.

For the current city council, elected in 2018, the decision was “like a ball and chain and it doesn’t know which way to turn,” said Vana who, along with other association members, takes turns in guarding the site day and night.

In recent days, the association’s members have twice started digging up the square’s paving stones, but have been prevented from doing so by municipal police whose van is parked at the site around the clock.

“We’re only missing a single piece of paper. I hope we get it soon so that work can begin,” Vana said.

Prague’s archbishop Dominik Duka has spoken in favour of the project, but merely on a personal level, “as a Catholic and a citizen.” The archdiocese has taken no official line.

For the time being, until a final decision is taken, Vana’s 60-tonne sculpture sits aboard a boat moored on the Vltava river in the city centre.

This article originally appeared on Yahoo