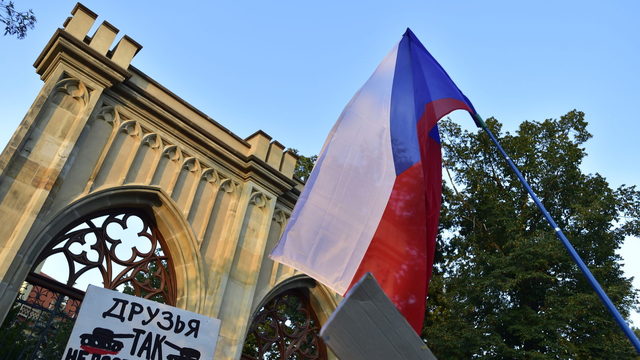 Prague – Several hundred people gathered in front of the Russian embassy in Prague on Monday, commemorating the anniversary of the August 1968 occupation, and expressing disagreement with the policies of contemporary Russia and the pro-Russian speeches of the Czech political scene. Instead of a tiny word struggle, the action went without incidents.

Crimean Politician Jemilev, who came to the Republic after twenty years at the invitation of the Czech Institute for the Study of Totalitarian Regimes, recalled the current Russian aggression in Ukraine. Russia’s political elites’ mindset has not changed since the Soviet Union.

“I am very pleased that this meeting is taking place near the embassy,” he said, referring to the fact that the speakers spoke directly in front of the embassy’s Russian embassy. “The appetite and the taste for aggression is still behind the fence,” he added. When he mentioned the name of President Milos Zeman in connection with his attitude towards Russia, the demonstrators present, many of whom arrived with Czech or European flags, responded with whistling and screaming “fuj” and “shame”.

The organizers ‘goal was to recall the tragic event on the eve of the 50th anniversary of the August 1968 invasion of 1968, but also to draw attention to Russia’s interference with other nations’ policies.

In addition to Russian policy towards Ukraine or Georgia, the speakers reminded Moscow of Syria and the strategy of the so-called hybrid war against the West.

The 50th anniversary of the occupation of Czechoslovakia by the Warsaw Pact troops and the events of August 1968 reminds many events in Prague and other cities. These include exhibitions, concerts, memorial gatherings, but above all the worship of the people who paid for their occupation against the occupiers. Speaking on this anniversary, the Prime Minister or the Presidents of both Chambers of Parliament advised President Miloš Zeman, on the contrary, he did not talk or participate in the commemorative events.