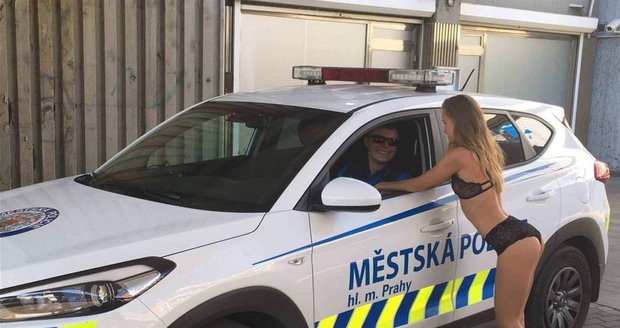 On Wednesday morning, August 1 city police published a photo on their facebook page, which immediately became controversial. The police car wore a woman in her underwear and attracted the label into the ranks of the City Police. In three hours the photo was deleted from Facebook, replaced by an apology.

On the facebook pages of the Municipal Police of the Capital City of Prague, a photo of a woman in underwear appeared in the morning hours of 1 August. She stood at the police car and behind the wheel sat the policeman smiling.

The picture was accompanied by the following text: “Hello guys, do you have a recruitment department in Prague 7? For those looking for another meaning in this photo. The photo was taken directly from the Prague 7 police officers on a hot summer days.

In fact, an avalanche of comments began: “Dear city police, if you can not catch your attention with something normal, so please reconcile yourself before resorting to such primitive contributions,” wrote an angry user, Adam. On the contrary, Ian took it with humor: “Join us today and get a nudity calendar to make the hot summer days of Zadax,” he said. Another joke about whether the City Police Prague is applying for the Sexistic Piglet Prize.

Three hours later the status of their site disappeared, and an apology was posted: “Because of the misinterpretation of our contribution, which was intended not to harm or discriminate against anyone, we decided to withdraw it. If we harmed anyone, we apologize. We are very sorry for the negative reaction the whole issue has caused,” the police wrote.