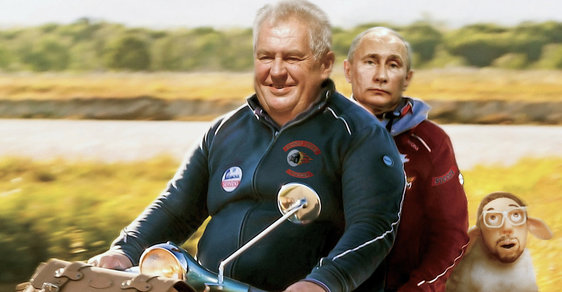 Just before Easter, Czech Justice Minister Pelikan released Yevgeniy Nikulin suspected of  hacking websites to the United States for extradition. He left Prague under the cover of darkness Friday night, shortly after the Constitutional Court dismissed Nikulin’s complaint against extradition.

According to US investigators, Nikulin hacked LinkedIn, Formspring, and Dropbox between 2012 and 2013. It’s not yet clear if the hacker was working for the Russian “troll farm”  the Internet Research Agency which US authorities accuse of interfering with the Presidential election. Nikulin continues to proclaim his innocence.

It can be viewed two ways. First: This is the fate of a man who should be judged in the US according to the rule of law. Nikulin was detained in Prague baed on an American arrest warrant. The courts ruled the hacker’s extradition legal, then Minister of Justice Pelikan decided to release him into US custody.

Second: If this is political, with whom do we side, the Russians, or the West? Nikulin helped the Czechs unwittingly. He forced President Zeman to reveal to whom his allegiances lie. Zeman, fought to have Nikulin sent back to the Russia at Putin’s request. A request that had no legal standing, yet Zeman fought tooth and nail to do Putin’s bidding.

Russia is not concerned with its citizens (an example is the fire of a shopping center in the Kemerovo city ​​of Siberia, and the inhuman behavior of local authorities). In Nikulin, however, they showed an abnormal interest in returning a citizen to the homeland. Here goes: The hacker must have a lot to say to incriminate the Russians.

Over time, we learned what was happening behind the scenes. Zeman and Mynar insisted that Pelikan Minister of Justice should send Nikulin to Russia, not to the United States. The President order Robert Pelikan to send him to Russia. Prime Minister Babis was complicit in this act. We also learned that Putin was questioning Zeman in Sochi regarding Nikulin’s status.

Radio Journal uncovered that Chancellor Mynar and Nikulin’s lawyer Martin Sadick met secretly in mid-January. “We met for personal reasons with the lawyer, we talked to Mr Nikulin, I asked how he was doing and how the case is developing,” the Chancellor admitted. According to Radio Journal, the Chancellor advised how to ensure that Nikulin does not fall into the hands of US investigators. This is extremely unusual, it is not the chancellor’s job to advise the subject of an extradition case how to avoid it and the Czech Republic is an ally of the United States.

Suddenly, the young man is released to the United States, and the Pelikan is behind the decision. The issue was surely well known by the Prime Minister, Babis had to approve it, otherwise Pelikan did not go to ANO

Then came the Russian accusation that the nerve agent was supplied by Czechs that poisoned former Russian agent Skripal and his daughter in Britain. Czechs rallied against this attack from Russia, in agreement with Britain and other countries, three Russian spies were expelled from Prague. Zeman once again acting on behalf of Putin ordered the BIS secret service to search for novichok on Czech territory.

The Castle’s reaction to Nikulin’s extradition to the USA? Spokesperson Ovčácek: “The explanation of the non-traditional process in the Nikulin case is public matter and the responsibility of the government and its representatives, not the Castle.” (he tweeted on behalf of the Russian Embassy and the Kremlin, not for Czech citizens.)

Chancellor Mynam told the E15 server: “From the information on the surface, it seems to have been an illegitimate move by the Secretary of State. If it is true what is in the media and what Nikulin’s attorney says, the Minister of Justice has dragged our legal system down to the level Bangladesh or the Central African Republic.”

Two notes. If something “came to the surface,” it was due the pressure of the Castle to release Nikulin to Russia.  Secondly, Mynar should explain what he means by “illegitimate”;?

A spokesman for the Russian Embassy in Prague Alexei Kolmakov told TASS: “Prague once again preferred Allied solidarity without taking into account all the facts and circumstances of the case.” He announced that the release to the US would caused “a deep disappointment on our part”. Russia is disappointed that after all their efforts to divide us from the EU and the US we are still allies..

We know what we are. Zeman lobbies for the interests of the Russians, and has been doing so more and more lately, and for second time has come into conflict with Babis and his government. The prime minister (and his minister, Pelikan) has twice now denied Russian orders and maybe now realizes the Czech Republic is in the European Union and a part of the West. We are not on Russia’s side.

This article has been translated by the editors of Czech Points. The original article in its entirety, written by Martin Fendrych can be found at Aktualane