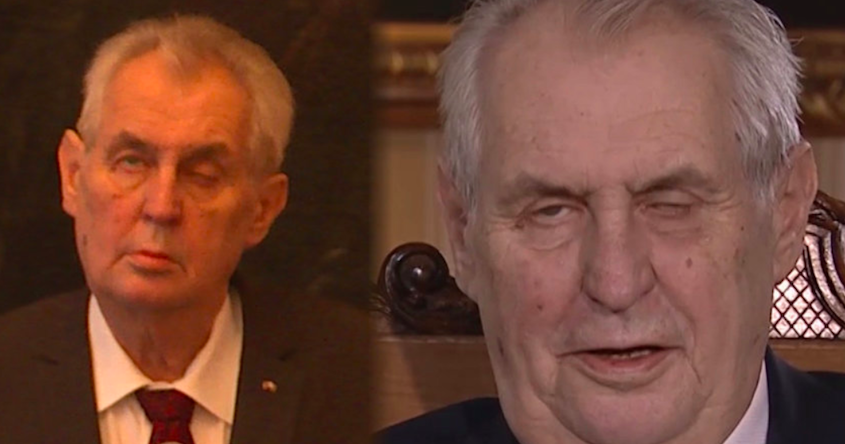 The health of President Milos Zeman is particularly well ahead of the election of the widely discussed topic. It is probably because 73-year-old Zeman appears more often on television, even in other situations than sitting comfortably in a padded chair in his Barrandov TV show. It has long been known that the head of state suffers from neuropathy in his lower limbs that prevent them from moving smoothly. But the Czechs have now begun to notice the special wink of the left presidential eye (from the point of view of the right viewers) whose cap moves as fast and asymmetrically compared to the second sight. This problem has been harassing the president for archive videos for several years, but has recently worsened considerably. Reported doctors agree that the problem could be related to progressive diabetes, which, according to the president, “left”.

“I noticed not only myself but also many other colleagues. Normally, they wink at both eyes at the same time. If this is not the case, the most common cause is either a disorder of the brain that controls the movement of the eyelids, or a disorder of the nerves leading from the brain to the muscles that control the lid. The most common culprits are diabetes, atherosclerosis (ie vascular wall stiffness resulting from aging related processes), increased blood pressure and lipids, increased alcohol consumption and smoking. From a neurological point of view, this is evidence of either a minor stroke or a process that affects nerves in the eye muscles. Mr. President is unfortunately a hot candidate for brain injuries, “neurologist Martin Jan Stránský explains.

Stroke, diabetes, or alcohol and nicotine?

The archive records show that Zeman’s eyes were blinking asymmetrically from the nineties. The blinking intensity has increased considerably in recent years. It was a lot to see in Zeman’s post-election speech on Saturday, January 13, 2018. At that time, Zeman even became the target of internet trolls who made a video-painting in which someone puts a pencil in his ear and therefore his right eye (from viewers).

“All I can say is that I have seen the president repeatedly in the media, and as a neurologist I can say that the president and his state of suspicion have not been raised in me. By Monday afternoon, when I saw him at the jewels of coronation, I did not get the impression that only a brief brainwashing would have taken place, “adds another neurologist Martin Bojar. He assumes, however, that overall fatigue also plays a major role in the current state of the president.

Diabetes is still a problem, the president doesn’t take care of himself.

Although Zeman said in November that the “diabetes had gone”, according to Stránski, it is not possible, and the progressive disease, on the contrary, causes further damage in his organism. “Although it is possible to control the level of glucose in the elderly, but the metabolic disorder remains. Mr. Zeman apparently lowered the weight, I would say maybe too much, at least in his face, but the failure remains. This explains the gradual worsening of his walking and balance, because diabetes still destroys the nerves in his legs. We see how today the President is not able to go without support at all. And if there is any situation that requires a faster movement, if not to help the neighborhood, it will fall, “adds the neurologist.

This turned out, for example, on Friday’s incident in the polling station, where the president scared the Ukrainian activist. In a deteriorated state of health, according to neurology at Zeman, three related processes are signed. “By all objective considerations, unfortunately, the president – except that he has reached a certain age – is suffering from the processes that have already been mentioned: aging and atherosclerosis, progressing diabetes, and finally the effects of nicotine and alcoholism. It is important to note that with age, brain reserves are absent, so the pathological processes that run there will gain more room, “explains Stránský.

Zeman is aware of the public’s interest in his health. A year ago, however, he dissolved a medical council composed of specialists to oversee his condition. This raised suspicion of a possible attempt to conceal the true condition of the president that Zeman had decided to dispel by asking the doctor to talk about his state of health again before the election.

According to his own Doctor, Zeman is well.

Congolese Chief Martin Holcat, on January 9, said Zeman was good. “The President is in good shape, he is able to perform this function from a health point of view,” he said. Zeman is in a good mood and undergoes regular checks about once every quarter. Its status can be said to be common. The doctors said Zeman could handle the next five years at the Castle.

But Stránský doubts this. “When any personal physician or dependent commission claims that the president is healthy, it must always be taken with caution. This is the case for every country, incidentally, the same has recently been claimed by Donald Trump’s physician despite his overweight and elevated cholesterol. In the case of Mr Zeman, this is a purposeful claim. Mr Zeman is at best well off or well maintained, but his past and present lifestyle plus other difficulties he can not do, of course, do not make him healthy, “says a neurologist. In his opinion, Zeman is no longer in power for the next five years.

Zeman’s mental capacity is sliding. According to neurologists, his health will worsen.

“We can all imagine that doing a good job as a president is a very hard work, both physically and mentally. From the doctor’s point of view, Miloš Zeman’s present objective health problems have overcome tolerable peace, and the further exercise of the presidency will continue to endanger his health. Not only me, but also my dear colleagues as prof. Pirk and others. From the President, he became the first patient. It would be best if he retired to a retired retirement, because the job actually threatens his health, so his work and decision making, “says Stránský.

Slow walking or impaired eyelid control may not have an excessive impact on President’s performance. As Zeman himself said last June in a visit to Vietnam to journalists: “Politics is not done with the legs but with the brain.” It is going to be a bigger problem with Stránský but Zeman.

“We have a progressive cognitive dysfunction, a gradual neurological failure. We all have in his memory his fabulous story about Ferdinand Peroutka and a title he never wrote. But it is also a growing inability to self-reflection, which is manifested, for example, by the use of vulgar words, unacceptable comments and other insults and formulations that a normal person would never use. Mr. Zeman is an excellent rhetoric, but he is talking more and more slowly and many times with exertion. He himself said the presidency is head and not feet. I’m sorry, but it’s just his head and brain that are now failing. As a physician, I would like him to obey himself and live as well as he can and without further threats, “adds Stránský.

Also, the second neurologist approached acknowledges that the presidential skills are weakening. But it is not an extraordinary thing, because it concerns every elderly person and a stronger smoker. “Cognitive performance may fluctuate a bit, that is, the ability to concentrate and express, but it affects every senior when he is tired, has diabetes, is dehydrated, or does not exactly care for glycemia. Yet, with a strong smoker, those blood vessels with greater strain or burden are not enough to bloody the most distant areas of the cerebral cortex, which, in unfavorable circumstances, may suffer in people of his or her age without diabetes. All you have to do is to be a smoker, “says Bojar.

Together with the disclosure of details of Zeman’s status, the question sometimes arises as to whether it is appropriate to go into the privacy of the head of state. According to Stránský, however, this is literally a public interest. The President represents abroad and is essentially the first citizen of the state. “The privacy of a person begins where his public influence ends. When it comes to a person who can change our future with one sentence, his health, including mental competence, is and must be a public subject, “he adds.