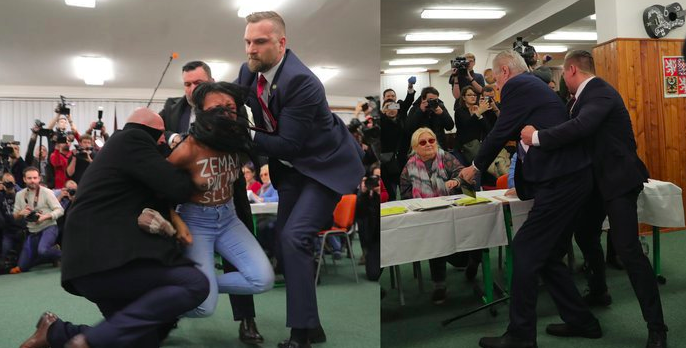 A Czech court issued a three-month suspended sentence on Femen activist Angelina Diash the Ukrainian who yelled “Putin’s slut” at President Milos Zeman at the Prague polling station on Friday, and placed her on probation for 12 months today.

The court expelled her from the country for 12 months.

Diash, 27, accepted the verdict in order to be allowed to return to Ukraine, her defence lawyer Lucie Hrda said.

“Though she feels innocent, she accepted the verdict to get home as soon as possible,” Hrda said.

Diash said she agreed because she was exhausted and wanted to go home.

She said she decided to protest because she wanted to warn Czech citizens against re-electing Zeman. The Czechs might threaten the sovereignty of their country by his re-election since Zeman is under the influence of Russian President Vladimir Putin, she added.

Diash must leave the Czech Republic within three days. She faced up to two years in prison for breach of peace.

Hrda said previously her client did not want to harm anybody and her protest was peaceful.

Using a false journalist licence, the activist entered the polling station at which Zeman was to cast his vote. When Zeman arrived she ran to him topless, yelling “Zeman, Putin’s slut” and having the slogan written over her naked body. Zeman’s bodyguards pacified her and the slightly shaken Zeman left the polling room for a while.

Diash today complained about how the bodyguards proceeded. She said they were very brutal.

Diash was in pre-trial detention from Friday afternoon. She could be kept in the cell for maximally 48 hours under Czech law. The police dealt with her case in a shortened regime, which means that she was not accused.

Diash joined the international Femen movement in 2009. Femen is known for its protests performed by half-naked women.