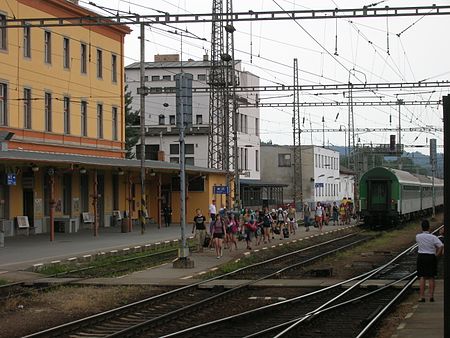 A freight train collided with a locomotive at the Jihlava railway station. Both trains derailed, no one was injured. According to the Railway Inspectorate, the accident, which happened before 6:00 a.m., caused CZK 7.3 million crowns in damages. Traffic on the Brno – Jihlava line was stopped after the accident but was fully restored at 5:15 p.m.

Firefighters received permission to try to separate the wedged locomotives. They had to cut off the bumpers and other parts of the trains. If this failed, an accident train would have to set off for Jihlava.

Restrictions on the operation of Czech Railways connections were partially restored as early as 10:00 on passenger and express trains, said ČD spokeswoman. Express trains continued to replace buses between Jihlava and Okříšky in the Třebíč region.

The freight train collided with the locomotive parked as it passed a signal prohibiting driving. The train moved the stopped locomotive 94 meters, said the Railway Inspectorate, then both locomotives derailed. According to Petra Musilová, a spokeswoman for the regional fire brigade, railway firefighters from Havlíčkův Brod and Brno intervened in the accident.