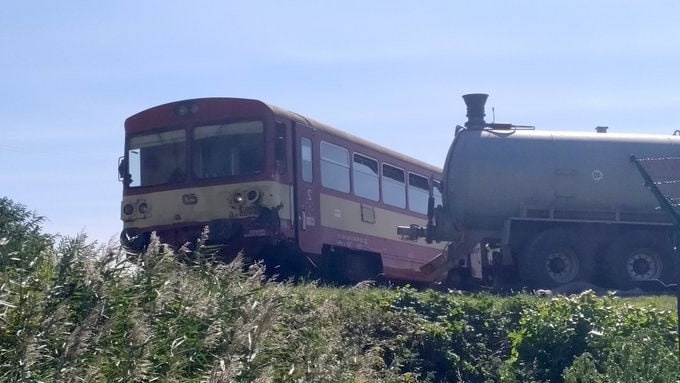 An express train derailed after colliding with a tanker this afternoon at the crossing in Kunovice. Three people suffered minor injuries in the accident. Traffic on the track has been stopped.

The accident happened at 1:17 p.m. at the crossing in Kunovice, which is secured only by warning crosses, an express train collided with a tanker at the crossing. The train was traveling from Brno to Old Town.

Rescuers, firefighters, and police intervened at the scene of the accident. “A tractor with a trailer, a small empty tanker, drove into the railway crossing at the moment when the train passed through here. According to initial information, three people are injured. In all cases, it should be a minor injury. There were about 40 people on the train,” a rail inspectorate spokesperson said.

According to the spokesman of the regional fire brigade Pavel Řezníček, most of the passengers got off the train on their own. The firefighters helped only a few older adults to leave the train.” Three injured were taken by ambulance to the hospital.

The tractor driver was not injured. The train crashed into the back of the tractor. According to my information, the train cars derailed in the accident two rail cars derailed, “said Řezníček. Firefighters also took some passengers to bus stops after the accident.

Traffic on line 340 is interrupted due to an accident. Arriva stated on its website that it had used replacement buses in the section between Uherský Hradiště and Ostrožská Nová Ves in the Uherské Hradiště region.

There have been several serious accidents on domestic railways in recent weeks. On July 7, two dead and 24 injured in a head-on collision of two passenger trains on a single-track line near Pernink in the Karlovy Vary region. A week later, a passenger train heading from Prague to Řečany nad Labem on the outskirts of Český Brod in the Kolín region collided with a standing freight express. The driver did not survive the accident. Last Wednesday, a passenger train from Klatovy to Domažlice crashed at the railway station in Kdyny in Domažlice with a diagnostic set consisting of a locomotive and a measuring car. Twenty-two people were injured in the incident.