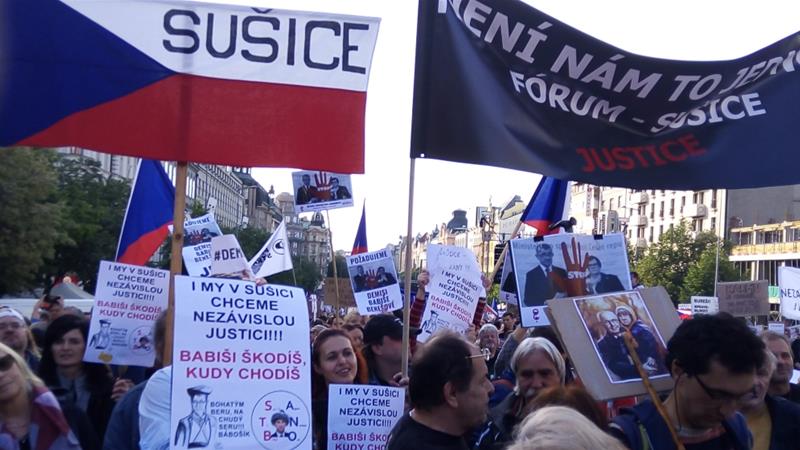 Thousands of Czechs protested for a fourth week in a row on Tuesday (May 21) against a justice minister they fear could influence a criminal case against Prime Minister Andrej Babis.

Protesters say Justice Minister Marie Benesova’s past comments and actions were supportive of Babis, a billionaire-turned-politician who has been charged with illegally tapping €2 million in European Union funds a decade ago when he was in business. He denies the charges.

As a member of parliament in 2017, Benesova was among a small group of lawmakers who did not support lifting Babis’s parliamentary immunity in the subsidy case. Earlier, in 2013, she served as justice minister in a caretaker government appointed by President Milos Zeman, an ally of Babis.

People gathered at Wenceslas Square in the centre of Prague, moving the protest to a larger space as the number of participants grew. Organisers estimated attendance at 50,000, surpassing the previous protests with around 20,000.

The crowd waved Czech and European Union flags and signs that read “You can’t break justice” or “I am ashamed of my prime minister”.

“If such people (as Babis) represent us, it is not good,” said Josef Hovorka, 34, an NGO employee.

“We could take inspiration from Austria, where politicians resigned for less,” he said, referring to a scandal that felled Austrian Chancellor Sebastian Kurz’s coalition government at the weekend.

Despite the protests, Babis and his ANO party have not suffered any significant drop in support ahead of a European Parliament election this weekend, garnering around 30 per cent in opinion polls.