Slovaks Rally for Freedom of Press 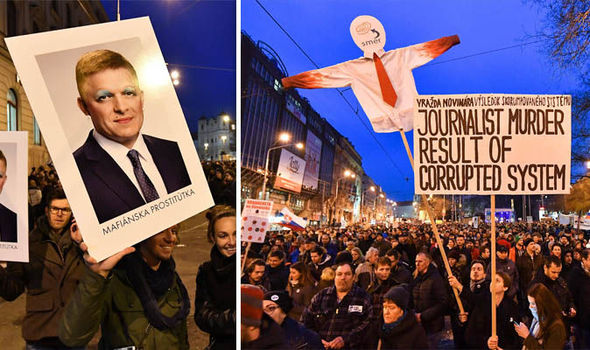 Thousands of people attended a rally called by civic activists to commemorate recently murdered investigative journalist Jan Kuciak and his fiancee as well as the freedom of the media in Bratislava today.

The late February murder of Kuciak and his fiancee triggered a political crisis in Slovakia and Prime Minister Robert Fico, the longest-ever serving Slovak PM, was forced to resign.

The Slovak police have failed to find the murderer, but they said at the beginning of the investigation that the murder was connected with Kuciak’s journalistic work.

The protesters warned of the situation in the Slovak radio and television RTVS.

The crowd chanted slogans against Fico’s Smer-Social Democracy and for an early election.

The daily Dennik N estimated the participation at 25,000. Similar rallies were called in some 20 towns across Slovakia and also abroad, including the Czech Republic.

“On May 5, Kuciak’s marriage was to be held. Instead, we are mourning the loss of an excellent journalist and archaeologist on the eve of the marriage,” organiser Juraj Seliga said.

According to the group For Decent Slovakia, one of the lessons drawn from Kuciak’s murder is that the public has to stand up for the freedom of the media.

The rally in Bratislava’s centre was preceded by a march through its streets.

More than 160 Slovak journalists have released an open letter criticising the RTVS public radio and television broadcaster for the atmosphere in it and for recent controversial departures of reporters who criticised the RTVS management.

The letter reacts to the RTVS’s decision not to extend the work contracts of four external reporters and to the notices that other reporters handed in.