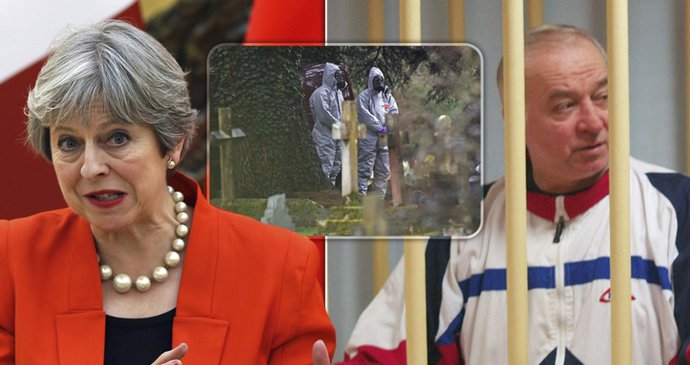 British Prime Minister Theresa Maya said yesterday after the meeting of the National Security Council that it is “highly likely” that Russia is responsible for the poisoning of agent Sergei Skripal and his daughter. The Russian Foreign Office has identified charges against Moscow as a fairy tale and a political campaign based on lies.

May updated the British Parliament on developments in the case of poisoning agent Skripal and his daughter after today’s session of the National Security Council. She stressed, among other things, that Britain is ready  to take necessary measures against Russia.

“I share the impatience of this House and the whole country to make Russia accountable to justice,” May said at the beginning of her statement. At the same time, however, she stressed the need to follow procedure and to have evidence.

Skripal and his daughter were poisoned by a nerve agent used by Russia , according to the British Prime Minister . Therefore, the government believes that it is “highly likely” that Russia is responsible for the act.

May summoned the Russian Ambassador to London to explain the source of the nerve agent used in the act. If Moscow does not provide a plausible explanation, London will treat the act as “an illegal use of force by the Russian state “.

BBC has told BBC radio chairman of the British Parliament’s Foreign Parliament Committee, Tom Tugendha, that the incident appears to be a “state sponsored attempted murder”.

“Frankly, I would be surprised if she did not blame the Kremlin,” Tugendhat said, referring to the speculation that Russia was attacking the pair. Moscow denies it.

May, according to the British press, has been pressured by some of her ministers to take a tougher stance against Moscow if it proves to be Moscow behind the attack. Downing Street has repeatedly said nothing can be done until the investigation is over.

If it turns out that Russia is the poison of Skripal and his daughter, the government has several ways to respond to the press. For example, she may deport Russian diplomats and agents from the country, impose financial sanctions on individuals connected to the Kremlin or not send a national team to the World Cup in the summer that will take place in Russia.

Sixty-six-year-old Skripal and his 33-year-old daughter, Yulia, found unconscious by passers-by on Sunday, March 4, in the center of South Salisbury. Since then, both have been in a serious condition in the hospital. More than 200 police officers from the counter-terrorist unit are involved in the case and in Salisbury in the south of England and chemical specialists. According to the Sunday statement of the authorities, the couple are in a critical but stable state.

Russian Foreign Ministry spokeswoman Marija Zacharov  “This was a circus in the British Parliament,” the spokesman said. “The conclusion is obvious. It is another information and political campaign based on lies,” she added.

Zacharov then told London that instead of inventing new fairy tales, it would be good to explain a number of previous strange deaths that occurred in Britain. As a case, he mentioned the poisoning of former Russian agent Alexander Litvinenko, theunclear death of one of the richest Russian entrepreneurs Boris Berezovsky, or the alleged poisoning of Russian entrepreneur Alexander Perepilic.

The main Russian media suggests Britain is responsible for the attack. Commentator of Russian State Television Dmitry Kiseljov, known for his hatred of the West and praise of President Vladimir Putin , said on Sunday in his program that the only people who could benefit from the attack are the British. London’s motive was “simply to revive (British) russophobia.” Kiseljov’s statements are generally considered to be the Kremlin’s voice in Russia, AP notes.

Former Russian Special Services Agent Mikhail Ljubimov in the popular Komsomolskaya truth newspaper said that Skripal is too small a fish to stand for poisoning for Russia . “Skripal was sent to the West as part of the exchange (detained spies between Russia and the US). This means that it is totally uninteresting to us,”  Ljubimov said.