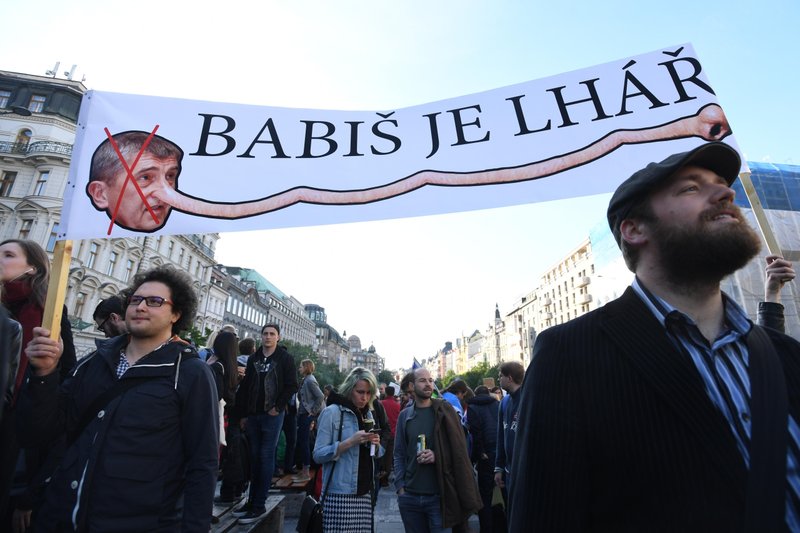 Prague – On Tuesday in Wenceslas Square in Prague, thousands of people protested against the planned government of Andrej Babiš (ANO) with the support of the Communists. Demonstrators filled the upper half of the square from the statue of St. Wenceslas to the tram track.

Not only politicians and artists, but also historians, physicians, and priests spoke on stage. The one-time event once lasted three hours, organized by the Milion Initiative for Democracy. The protest rally was also held in other cities. “The protest is against the arbitrary conduct of Babis, Zeman and the Communists,” one of the speakers said at the beginning.

The people brought the flags of the Czech Republic and the European Union, and many of them banners against Babiš, with the inscriptions “You do not bother us”, “Babiš has to stand in court, otherwise we do not have the rule of law” or “Away with tyrants and traitors”. On other transparencies, people had photographs of victims of the Communist regime, among which was the likeness of the Communist of the tortured priest Josef Toufar.

The people filled the space under the statue of St. Wenceslas, where the podium stood, to the crossing of Wenceslas Square with Jindřišská and Vodičková Street. The upper section of the square was closed by police officers. The number of participants did not want to comment.

There were several opposition politicians on the podium. Among them were Miroslava Němcová (ODS), Jiří Dienstbier (ČSSD), Vít Rakušan (STAN) and Mikuláš Ferjenčík (Pirates), who spoke about the distribution of “trafik” among the members of the YOUTH.

In the square came former deputy Kristýna Zelienková, who in the past came from ANO to protest. “ANO is just about filling the Agrofert coffers,” she said. She subsequently called on other democratically-minded ANO members to step out of the movement. The unsuccessful candidates for President Marek Hilšer and Pavel Fišer spoke to the people.

“I appreciate it as a meeting of politicians who failed in the elections and in the presidential election,” he responded to the demonstration.

The speech came from historian Petr Blažek and psychiatrist Petr Pöthe. “Instead of talking about who is sick and where he lives, we should talk that society is sick,” said Pöthe.

The singers were singing the songwriters Jiří Dědeček and Václav Koubek, who asked people not to hide their pride and dignity. The actress Barbora Hrzánová and the presenter Ester Janečková also spoke. Among the last, the priest Marek Orko Vácha.

“Freedom is never and never fought once and for all, it needs to be taken care of, where morality collapses, economics will collapse, the state can not be governed as a company, and money can not be put in the first place,” he said. Finally, Dagmar Peck sang the national anthem.

Hundreds of demonstrators in other cities

Protests were not only held in Prague, but also in other larger cities, according to the organizers involved in 200 municipalities.

About a thousand people were protesting at the Green Zee market in Brno. They had banners with the inscriptions: “We do not want a criminal prosecuted prime minister,” “I do not want the Prime Minister Straback, a liar, a bastard, a manipulator, a criminal,” Babis is the cancer of this country, or “Communists and the government do not want to rule”.

Hundreds of people participated in the parade with the center of Hradec Králové and the demonstration at the statue of the first Czech flyer Jan Kašpar in Pardubice. “We do not like what is happening, the power of the Prime Minister, who cooperated with the StB, and the communists after 30 years, we want to speak, we do not care,” said organizer of the Pardubice protest Ondřej Müller.

In front of the Slavic cultural house in České Budějovice, where Babiš came to the citizens’ debate, he demonstrated about a hundred people. Protesters who, when Babiš arrived, chanted the Hanba or StB, then went into the hall for discussion, where politicians spat over and argued with supporters of the prime minister. Babis and the ministers were visiting the South Bohemian Region today. Several dozen people protested even in the morning before the South Bohemian Museum.

Olomouc and Pilsen met about 500 people, about 400 in Jihlava, about 300 in Ostrava and Liberec. The protests were also in other places. In Olomouc there was criticism of the Communists’ efforts to tax religious restitution, some of the speakers in Ostrava called on people to participate in the political programs of the parties they sympathized with and to come to the elections. In Liberec, some speakers said they did not want a president who was pulling the republic to the East. “Things have moved to where they should not have been,” former advisor to President Václav Havel Jan Šolc said in Liberec.

The organizing initiative, which has organized several demonstrations this year, wanted to collect a million signatures under the Peace Prize for Good Prime Minister and Good Governance. To date, she has earned more than 254,000. “If there is something left of the 100 days, it is that civil society lives,” one of the organizers Ben Roll said at the end of Tuesday’s demonstration in Prague.

Babiš will make a premiere promise Wednesday night at Prague Castle. After his first cabinet gained no confidence in January, President Zeman will use his second option to appoint after the election of the head of government and promise he will once again become the chairman of the winning electoral group. The first Babiš government, which is in resignation, was one-color, now the ANO holds a coalition with the Social Democrats and the support of the Communists.