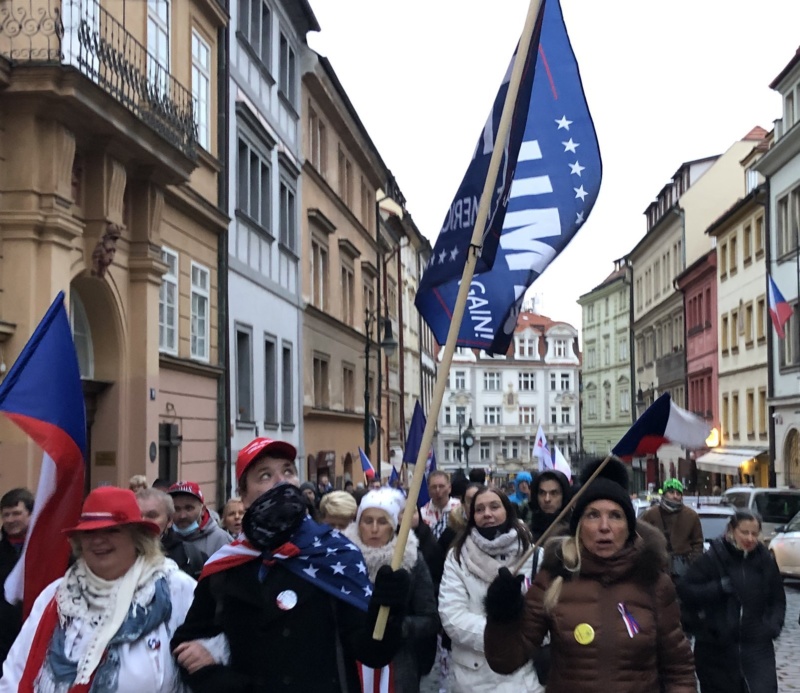 Dozens of people at a demonstration in Prague this afternoon questioned government measures against the spread of coronavirus, the US presidential election results, and the circumstances of the death of former Slovak police president Milan Lucansky. Their procession passed from Wenceslas Square in front of the American Embassy in Malá Strana and continues according to plan in front of the Slovak Embassy in Bubeneč.

About 50 people first heard more than an hour-long speech in Wenceslas Square, in which speakers criticized government restrictions against the covid-19 epidemic and vaccinations against the disease, some questioning the very existence of coronavirus. Several of them had “Unvaccinated” written in David’s six-pointed star, which the Nazis called the Jewish population.

Demonstrators also expressed support for outgoing US President Donald Trump, who said he lost the November election because it was rigged. They questioned that the recent death of the former Slovak police president Lučanský, who was being prosecuted, was suicide.

Today’s action is the number of demonstrations in a row that criticizes government measures against coronavirus and calls for repeal. The procession left Wenceslas Square around 3:30 pm, led by a horse-drawn carriage. The Lesser Town demonstrators, who carried Czech and American flags, came across the Old Town Square and Charles Bridge.