Pride Festival kicks off in Prague 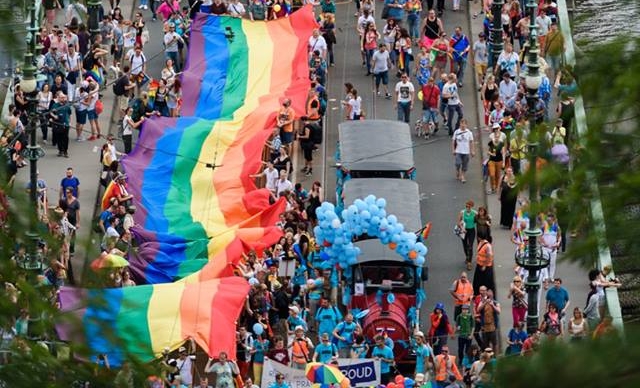 The tenth year of the Prague Pride festival, which brings the life of lesbians, gays, bisexuals, and transgender people (LGBT), officially began on Prague’s Střelecký Island. It will offer more than a hundred events during the week instead of the traditional parade through Prague on Saturday, and it will culminate in a boat trip on the Vltava. Some of the events will also take place online due to the coronavirus epidemic.

The festival started at 18:00 with DJ duo Urxins, singer and rapper Hellwan and the group Lače Manuša will perform. Due to coronavirus restrictions, a maximum of a thousand people will reach the island; after an hour, the limit has not yet been met.

Hundreds of people arrived at the event today, some of them with rainbow flags, others with distinctive make-up or wigs. About five opponents of the festival came to protest, and the police supervised them. Opponents talked to the participants and filmed the festival. The conflict did not occur.

During the week, exhibitions, sports events, lectures, discussions, screenings, and stand-up performances are prepared for those interested in the festival. There is also a limited number of places, and the program will be broadcast online. The organizers promise from the live broadcast that the festival will spread throughout the country. Due to coronavirus restrictions, fewer guests from abroad will arrive this year than in previous years.

The festival was also supported by the Prague City Hall, which hoisted a rainbow flag on the New Town Hall building. The American embassy also expressed support on Twitter. Notable buildings in the Czech Republic will be illuminated with rainbow lights, such as the New Stage of the National Theater, Brno’s Old Town Hall, and Pilsen’s Tyl Theater.