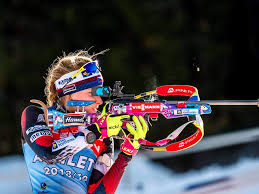 Markéta Davidová won Biathlete of the Year for the second time in a row. The 23-year-old competitor won beat out Lucie Charvátová, who received the Performance of the Year award for her surprising bronze in the sprint at the World Championships in Anterselva.

Davidová won bronze three times in the short season in the sprints of the World Cup – in Östersund, Sweden, in Annecy, France, and in front of the empty stands in Nové Město na Moravě. Overall, she finished 14th in the World Championships – the best in her career.