Lukashenko sworn in as Belarus president in secret ceremony 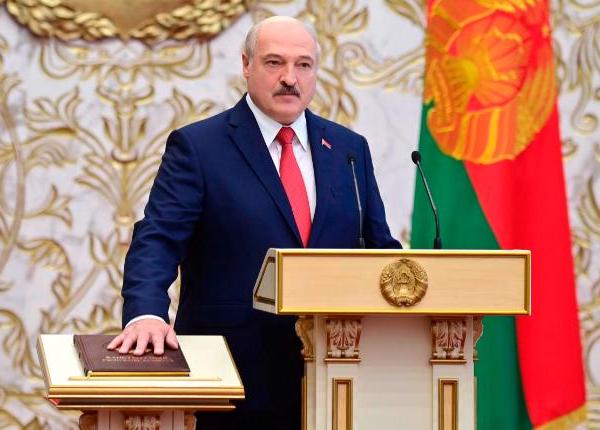 Alexander Lukashenko unexpectedly took the oath today and became President of Belarus for the sixth time in a row, the state news agency BelTA reports. The inauguration took place despite the mass protests that erupted in the country after the official announcement of Lukashenko’s questioned victory in the August presidential election. The opposition considers him to be illegitimate, and the EU does not recognize Lukashenko’s election. Lukashenko’s front-line opponent Pavel Latuska called for civil disobedience, and there was a call to hold protests in all cities tonight. Germany and Lithuania have confirmed their decision not to recognize Lukashenko as president.

BelTA wrote that several hundred people were invited to the inauguration at the Palace of Independence, including senior officials, MPs, journalists, scientists, and cultural and sports figures. According to the independent news server Tut.by, the public was not informed about the event in advance.

Numerous security forces guarded the city center and the surroundings of the Palace of Independence’s presidential residence. Tut.by pointed out that the guests were hastily taken in, and there were no diplomats among them. The convoy with Lukashenko passed through the city to the palace in the deserted streets.

Demonstrations began in Belarus shortly after the authorities announced that Lukashenko had won the election with more than 80 percent of the vote. Many Belarusians are convinced that this result is falsified, and the opposition, like the EU, does not recognize it. Participants demand the departure of Lukashenko and new elections. Demonstrations against the man, who has ruled the country for 26 years and is described as the last dictator in Europe, continue despite the often brutal police interventions and arrests.

“Today, we have witnessed an unprecedented situation. The outgoing president, who claims to have won more than 80 percent of the vote, conducted a special self-inauguration operation. Under the protection of the OMON,” Pavel Latuška, one of the leading representatives of the Belarusian opposition, wrote on Telegram.

“For us, the citizens of Belarus, he is no one for the world community now. An unfortunate mistake of history and a disgrace to the civilized world. We will never agree to falsify and demand new elections! We call on everyone to launch indefinite actions of disobedience!”, Latuška wrote.

There was also a call on the opposition portal Nexta Life to hold protests this evening. “Today at 18:00 (17:00 CET), the whole of Belarus will go to the centers of its cities to show the end of the rat king’s legitimacy,” he said in a call, alluding to Lukashenko’s frequent derogatory call for rat demonstrators.

In response to the secret presidential inauguration, German government spokesman Steffen Seibert confirmed that Germany did not recognize Lukashenko as the head of state of Belarus, despite today’s ceremony in Minsk. Lithuanian Foreign Minister Linas Linkevičius called the inauguration a farce. “Fake elections. Fake inaugurations,” he wrote on Twitter.

The Czech Minister of Foreign Affairs Tomáš Petříček expressed a similar opinion. “The elections in Belarus were not free and fair. That is why their results are not legitimate; that is why today’s inauguration is illegitimate,” he tweeted.