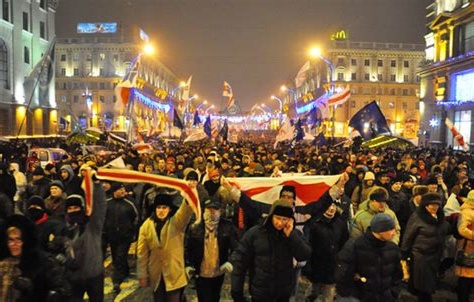 Belarus President Alexander Lukashenko, now facing the biggest protests in his 26 years of authoritarian rule, rejected opposition calls for new presidential elections. But later hinted at the possibility, according to Russia’s RIA Novosti news agency, but only after the new constitution was adopted. Lukashenko’s chief rival, Svetlana Tikhanovskaya, has meanwhile declared that she is ready to take the lead in the nation. According to Interfax, her staff called for a general strike over Lukashenko’s resignation. Some businesses are already on strike.

The country’s situation between Russia and the eastern edge of the European Union will be discussed on Wednesday by the highest representatives of the EU member states. According to the head of Czech diplomacy, Tomáš Petříček, the Czech State Security Council will deal with Belarus on Tuesday. US President Donald Trump told reporters that there is a terrible situation in Belarus, which the US is closely monitoring.

After the presidential election, protests in Belarus erupted on Sunday, August 9, after which the authorities declared Lukashenko the winner for the sixth time, this time with more than 80 percent of the vote. However, many Belarusians reject this result as falsified and consider Svetlana Tikhanovskaya, who went to Lithuania under pressure from the authorities, to be the real winner.

“It will be so, guys. We have to adopt a new constitution, and you should approve it in a referendum because we also passed the previous constitution in a referendum. And after the new constitution – if you wish – elections can be held – parliamentary, presidential and local, “Lukashenko said during a visit to Minsk’s MZKT factory, which was broadcast live on state television.

Earlier today, Lukashenko said that neither opposition appeals nor protests against election rigging would force him to run in the new presidential election. “You should never assume that I will do something under pressure,” he said, stressing, “There will be no new elections until you kill me.”

The president’s refusal followed shortly after Svetlana Tikhanovskaya from Lithuanian exile said she was ready to take responsibility and stand at the head of the nation. According to her, Belarus should prepare the legal framework for new and fair presidential elections as soon as possible.

Despite police violence and mass arrests of protesters, protests in Belarus are growing. On Sunday, a country of nine million experienced the most massive demonstration in its history, an estimated 200,000 people gathered in Minsk. Protests for Lukashenko’s resignation also occurred in other cities, and strikes broke out in some key companies. According to foreign media, today’s Lukashenko’s visits to Minsk factories were accompanied by the call “Leave!” and “We are not sheep, we are humans!”

The Cichanouska staff called for a general strike for Lukashenko’s resignation as president, Interfax reported today, reminding that some large Belarusian companies are already on strike. According to local media, thousands of people gathered again in the center of Minsk and in other cities tonight to demand Lukashenko’s departure.

Lukashenko repeatedly discussed the situation with Russian President Vladimir Putin over the weekend, who promised to help him under a military cooperation agreement.

Russia’s military aid to Belarus would be an unjust invasion that would destroy the last remnants of Belarusian independence, Lithuanian Foreign Minister Linas Linkevichius warned. Today, German President Frank-Walter Steinmeier appealed to the Belarusian army “not to sin by attacking its population.”