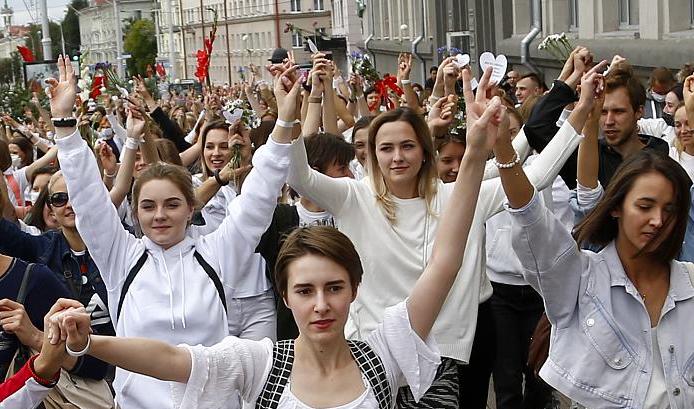 Despite police violence in several Belarusian cities, protests continue against the falsification of Sunday’s election of the head of state, which, according to the election commission, was won for the sixth time by authoritarian President Alexander Lukashenko.

Belarusian Nobel Prize winner, writer Světlana Alexijevičová, called on Lukashenko to step down. Since Wednesday night, on the fourth night of the series in a row, police have detained another 700 protesters. About 6,000 people were arrested in the previous days. As of this morning, people in Minsk, according to the Tut news site, would create living “chains of solidarity” with those affected by police brutality.

“About 700 people were detained for participating in unauthorized actions. The riots in the country are no longer mass, but the level of aggression against law enforcement remains high,” the Interior Ministry said. He added that from 9 to 13 August, 103 police officers were injured “as a result of citizens’ misconduct”, 28 of whom had to be hospitalized, the TASS agency wrote.

Today, the Minsk City Court published the names of five hundred people arrested in the metropolis on the first night of a demonstration, sent to prison on Monday for an administrative offense involving participation in an unauthorized event. The length of sentences ranges from seven to 25 days.

Several different channels of the Telegram news service showed in videos how people in Minsk, Grodno, Brest, and other cities demanded that Lukashenko end the violence and resign. At the same time, solidarity with protesters has increased. In Minsk, more than a hundred doctors spoke out against the violence. Leading state television presenter Yevgeny Perlin resigned from his well-paid job due to “lies” and “violence”.

Lukashenko has been in office for 26 years and is considered the last dictator in Europe, the DPA recalled. On the other hand, opponents of the president see the winner of the election in the 37-year-old opposition candidate Sviatlana Cichanouska, who left the country for Lithuania under pressure from the authorities.

According to Interfax, the protests in Minsk tonight ended without harsh clashes between protesters and police, which were characteristic of the previous three nights after the election. According to eyewitnesses, the conflicts still took place, but they did not grow into brutal clashes. “The police were generally satisfied with being present at the gathering of protesters tonight,” the agency wrote. Protesters shouted slogans like “Leave!” and “We believe we can, and we will win!”. In one housing estate, where barricades were erected, police used tear gas, and elsewhere, according to witnesses, they fired rubber bullets.

Former Ambassador Valeryj Capkalo, who was not allowed to run by the authorities, called on the European Union from Russian exile to recognize the Cichanous president. The opposition National Salvation Front, which Capkalo reported on Wednesday, said on its Telegram channel that it had begun gathering evidence to file a lawsuit against Lukashenko at the International Court of Justice in The Hague. She added that she had already hired some foreign lawyers to do so, and also encouraged lawyers in Belarus to cooperate.

Hundreds of entrepreneurs in information technology urged Lukashenko to resign under the threat of leaving the country and their companies, the DPA. According to videos, the authenticity of which could not be verified, some former members of special forces criticizing the violence threw down their uniforms or burned them because they vowed under oath to protect the people and not keep Lukashenko in power.

The four-time Olympic champion in biathlon, Darja Domračevová, expressed horror on the social networks over the violence in her homeland and called on special police units to end the “unjust terror in the streets.”

“Leave nicely, even if it doesn’t work out, blood has already been shed. Leave until it’s too late, until you throw the nation into terrible misery, into a bottomless civil war. Leave,” the Nobel prize winner Alexijevičová told Lukashenko on Radio Svoboda.

Belarusian police arrested thousands during the protests, and hundreds were injured. According to the media, two protesters lost their lives. Lukashenko has not heeded calls from the opposition and EU for dialogue and says unemployed criminals are behind the protests.

According to the AFP agency, police violence and large-scale arrests in Belarus was condemned by UN human rights experts. In a statement published in Geneva, they called on the international community to put more pressure on the government in Minsk to end violence against citizens exercising their fundamental rights.