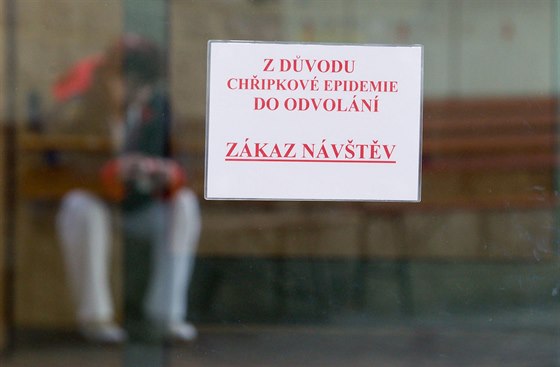 Across the Czech Republic, the number of patients with influenza has reached epidemic levels. Patients are growing in all regions. The highest proportion of patients is Liberecký, Jihočeský, Jihomoravský, Středočeský and Ústecký kraj. There are 1,722 patients on the entire territory of the Republic, according to the Ministry of Health.

Compared to last week, the number of patients grew by 18 percent. Some hospitals and retirement homes banned visits.

Data are reported by doctors to regional hygienists, patients who have not come to the surgery, there may be more. The epidemic is spoken when the number of patients ranges between 1,600 and 1,800 patients per 100,000 people.

“The latest data prepared by the State Institute of Health confirm that it is a large-scale epidemic of influenza throughout the Czech Republic. Both types of viruses with a higher rate of influenza B are circulating, “said Chief Hygienist Eva Gottvald. She added that ten people died in this year’s flu season, with 57 patients having severe symptoms in hospitals. What is the situation compared to the past years, according to the chief hygienist, is clear after the epidemic is over. It usually takes about six weeks.

Hygienists recommend that people avoid larger groups of people and adhere to basic rules such as handkerchief or hand washing after mass transit. “To boost immunity, it is advisable to consume enough fruit and vegetables as natural sources of vitamins,” Gottvald said.

There is also a vaccination that is most appropriate in October and November. According to experts, it is now too late for them and the vaccine does not protect against the epidemic because it can not produce antibodies. “It takes about two weeks to create antibodies. Vaccinations now do not have to help, but they can, “says the chief hygienist.

For the elderly over 65 and other selected groups, vaccination is covered by public health insurance but must be repeated every season. The effectiveness of the vaccine is about 60 percent because it only affects some strains of influenza. But it reduces the risk of serious complications.

About five to seven per cent of Czechs are ingested, 20 to 30 per cent in the elderly. The European Commission recommends that up to 75 percent of seniors and risky populations, including health professionals and doctors, be vaccinated.

In the Liberec region, sickness increased by 21.1 percent last week, with 2151 patients with acute respiratory infections per 100,000. Influenza B virus prevails with more mild symptoms.

In the South Bohemian Region theepidemic continues for the second week, with the hygienists recording 1981 patients per 100,000 inhabitants. The most affected category is people over 60 years old. “They are people who suffer from other illnesses as well, and their course can be serious,” said Jitka Luňáčková of the district health center in České Budějovice. Since the beginning of the year, South African doctors have reported nine major cases of influenza. Three of these nine died.

South Moravian Regionhas 1,960 patients per 100,000 inhabitants, 1750 patients a week ago. The flu is so sporadic, the head of the anti-epidemic department of the South Moravian Hygienic Station Renata Ciupek said.

In Central Bohemia,sickness increased by more than a fifth to 1,837 cases per 100,000 people. Hygienists have recorded 13 cases of severe flu in the Central Bohemian region, of which two people have already died.

In the Ústí Region, five out of seven districts of the region crossed the epidemic border. Below the border remains Mostecko and Ústecko. In the region there are 1730 patients per 100,000 inhabitants. The most ill are traditionally among preschoolers, schoolchildren and youth. Almost all cases are acute respiratory illnesses. Physicians have also experienced typical flu, but are no complications.

In the Pardubice region, sickness jumped nearly a third compared to last week. There are 1593 patients per 100,000 inhabitants in the region. The districts of Chrudim and Ústí nad Orlicí are most affected, where the values ​​are considerably higher, Olga Hégrová, head of the anti-epidemic department of the Regional Hygienic Station in Pardubice, said.

In the Moravian-Silesian region,sickness increased by more than a tenth. There are 1,757 people with acute respiratory illnesses per 100,000 inhabitants. The most sick are in Opava, Ostravsko and Frýdek-Místek where the increase was 68.3% against last week.

At the beginning of the epidemic is the Zlín Region, where 1687 patients out of 100 000 inhabitants are now. Illness increased over the past week by 16 percent, with flu by 137 percent.

Last year the flu epidemic came, the most ill being from the beginning of the year to mid-February. In connection with the flu, more than 300 people died in the hospital and 108 of them died. The vast majority were patients who had a chronic illness, most commonly a cardiovascular system. Among them, they were over 60 years old.