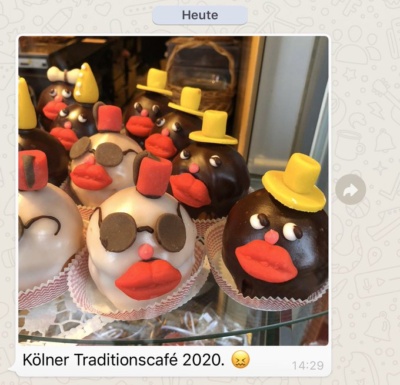 Germans in search of something sweet are losing their appetites over Cologne bakers racist dessert.

Schokokuss is a traditional dessert popular during the German February carnivals. However, baker Gregor Fromme’s prepares his in the form of a black head with large red lips.

German columnist Jasmina Kuhnke took to Twitter to call out the confectioner after seeing a photo of his latest creation.

“Dear Mr. Fromm Confectionery, your desserts are disgusting!” Wrote German columnist Jasmina Kuhnke on her Twitter profile on Friday. She shared a picture of desserts in the shape of blackheads with thick red lips and fez with tassel.

The bakery owner can’t believe people have taken offense. According to him, it is an old confectionery tradition. He said the dessert used to be called Mohrenkopf (Moorish Head) but was changed because of the possible racist overtones.

The bakery in Cologne now sells them under the name ‘funny carnival heads.’ Gregor Fromme, the owner of the company, defended his products and responded to criticism from social networks in an interview with Kölner Stadt-Anzeiger.

“We wanted to stylize desserts in the way carnival costumes were designed in the past,” explains Fromme. “Don’t look for any racist overtones. A lot of African-Americans and Asians visit us. So far, no one has complained about products,” the entrepreneur argued.

The owner also stated that the controversial dessert has been a traditional carnival treat since the 1960s. However, following a wave of resistance, above all on social networks, he wonders if carnival heads will be withdrawn from sale.

Fromm’s bakery and pastry shop in Cologne has been open since 1893.

The so-called blackface is a kind of parody performance in which white comedians disguised themselves as blacks. Americans regard it as a symbol of racism in the US.