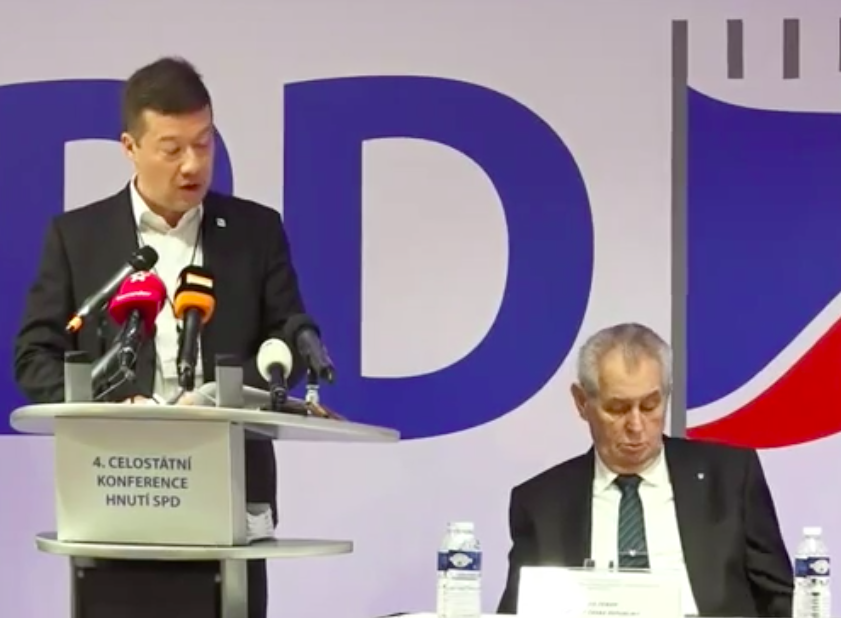 In Prague, in Pankrác, delegates of the Freedom and Direct Democracy (SPD) delegations met on Saturday. At a national conference, they decided who the party would support in the January presidential election. President Milos Zeman also attended the congress. They also indirectly backed it instantly

The movement Praised the work of Milos Zeman in his post, and should therefore continue in the second term.

“Although we have differing views on some issues, we consider the results of the work of President Milos Zeman to confirm the correctness of the direct election principle of the President of the Czech Republic. In the upcoming presidential elections, a candidate supporting the principles of direct democracy must be backed again, “the SPD said in a press release.

The opening speech of the head of Tomio Okamura’s movement began . He noted that if the alleged media ignorance had not been made, the election outcome of the movement would be at least twice as high. The SPD won less than 11 percent of the vote in the election.

“We are not extremists, we are pushing for what most of us want,” Okamura told critics.

President Zeman approached the microphone as the second. He appreciated the SPD program, but at the same time pointed to contradictions in it. Specifically, he does not like the President that the SPD does not support foreign military missions.

The opening speeches were the only part of the congress on which the journalist’s movement admitted. The remaining part will be closed for security reasons, she said. It follows, for example, the evaluation of the elections and the current situation.

Delegates should also talk about the SPD’s strategy during municipal and senate elections to be held next year. Another topic was the conference, which will be attended by representatives of affiliated European political parties from eight countries in the middle of December, including Marine Le Pen, President of the French National Front .

The most important part of the congress was, however, the decision to support the presidential election. Okamura advocated the promotion of a candidate who opposes Islam, uncontrolled migration, is for direct democracy, and puts national interest first. At the same time, he should have a real chance to vote. Those criteria from the registered candidates were the most responsible for Zeman.