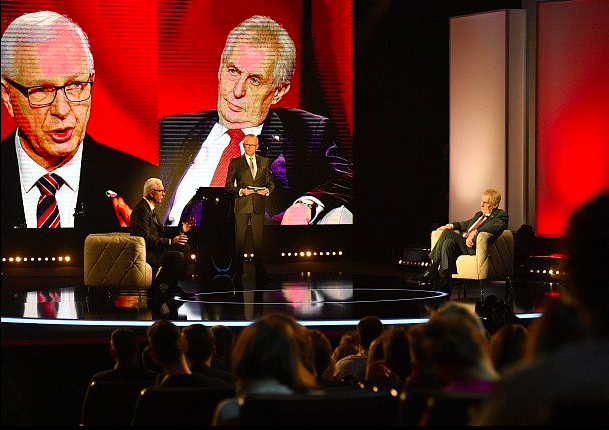 The selection of topics discussed by presidential candidates on TV Prima Prima on Tuesday night marked one of the participants Jiří Drahoš as “rather tabloid”. In the debate, he said he lacked “presidential” themes important to society, such as foreign policy or social affairs. Drahos told CTK today. The first denomination of the tabloids was rejected.

At the same time Drahos considers the behavior of the supporters of President Milos Zeman, who often entered the duel and the candidates interrupted with loud cries, as undignified. Prague Castle did not want to comment on the debate, according to the president’s spokesman, Jiří Ovčáček, is a “full and only voters” rating. Moderator Voříšek in the press release rejected the criticism.

On duel Zeman and Drahos looked an average of 2.2  million viewers over 15  years , the most watched moment there were nearly 2.6 million, said Adam Halmoši for television. It was the highest view in the history of Prima TV.

There were several hundred spectators in the hall of the Karlín Music Theater . Each of the candidates could have brought them 400, Prima did not invite any audience. The spectators were very noisy, each statement of the candidates accompanied by loud applause, whistle or thunder. Karel Voříšek, the moderator of the program, had to warn him several times, but he did not manage to fix it. Both camps were noisy as well.

“In particular, what President Zeman was demonstrating there was an overwhelming measure, it was undignified,” Drahos told CTK. The television, according to him, also chose “incredibly uncomfortable” chairs that were “usable” only for someone who “sinks and stays there”. “The fact that Mr. Drahoš evaluates the comfort of the chair is very funny,” Halmoshi said.

The selection of topics over which the two candidates for the post of head of state have discussed, considers Drahoš to be “rather tabloid”. “It was the subject of how I tried to show in some cases which people are not interested at all. When I saw the result of the poll of what people were interested in, none of the themes we were opening were there, maybe with the exception of migration. poll) relatively far, “he said.

Drahos noted that his view was not “a presidential debate”. “There were no presidential themes, there were foreign policy topics, topics important to society, social issues,” he said. An exception to this was the question of security and migration. “There, Milos Zeman tried to give me the sticker of the only one who wants to invite the migrants.” The word is false in this case, it is a lie, of course, it is probably the only politician who does not know I have never said anything like this.

“Given that the topics discussed in the Czech Parliament and the Senate of the Czech Republic are also being discussed in the course of the debate and which are also relevant to the Constitutions of the Czech Republic, we do not consider them tabloids, so we do not understand what should be according to their tabloid rating. religious restitution, the right to possess weapons, the possibility of mitigating the anti-smoking law or migration issues, “said Adam Halmoši from the press department. Drahos, according to him, had no comments on previously submitted topics.

CTK, with the same questions to evaluate the debate, approached Zeman’s spokeswoman Ovčacka. “The rating is full and only for voters,” he wrote.

Moderator Voříšek in the press release rejected the criticism. “My job was not to be the judge of two candidates or educators, but to accompany the show, to provide room for their debate and to intervene really only in the worst case,” he said. “In the news, we discussed the possible ways of moderating, we decided to allow the two gentlemen to debate together as well as what happened, to judge how anyone who has succeeded has the opportunity to vote for the election,” he added.

According to the server iRozhlas.cz spoke in the Zeman debate over 24 minutes, his dragon Dragoš less than 16 minutes, similar to the moderator Karel Voříšek. The audience in the hall also received space for twelve minutes. Five minutes later, they took entrance from the studio.

The two contestants will meet in Czech TV on Thursday night, will play in the Rudolfinum in Prague in a more private environment, and each of their candidates can bring their 30 fans. Drahos from Czech Television expects another program format. “I expect that it will be a cultivated debate and the audience will be cultivated or that Czech Television will keep it within reasonable limits so that it is a dignified presidential debate,” he added.