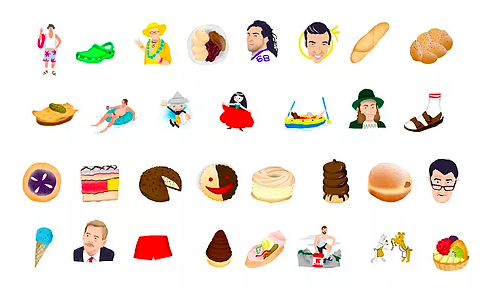 A Czech design student has come up with a custom set of 180 emojis that depict various aspects of Czech life and humour. Within a week of being shared on social media, the designs, fittingly called “Czemoji”, have garnered much attention from the media as well as the wider public. She now plans on making them publicly available for use on digital platforms.

Originally just collections of individual text symbols, such as the semicolon and brackets, today’s emojis have evolved into complex images depicting faces, objects, foodstuffs and more. Often they carry double meanings and their use has moved beyond that of a simple internet communication device.

Ranging from political references and Jaromír Jágr’s once famous mullet hairstyle, to activities such as mushroom picking and beer drinking, there is something for everyone with a basic understanding of Czech history, current affairs and culture.

Ms. Juríková says that she first got the idea in December, while trying to redesign the standard set of emojis traditionally used in social media chats.

“My original intention was to redesign normal emojis, but after some time I realised it doesn’t really make much sense to just make new emojis out of nothing. I started thinking about it more, wondering how to make it more personal and about various styles, for example using the Little Mole as a baseline inspiration.”

She ended up creating nearly 200 emojis which have caused quite a sensation online and in Czech media since they were shared by the art magazine Czech Design last week.

In fact, many people are now asking where they can download them.

Still shocked by the mass public interest, Ms. Juríková says she certainly intends to make her Czemojis available for download sometime during the autumn months. However, legal issues are likely to have an impact on their final design, she warns.

“Now I am really thinking I will make it publicly available, but with these rights it is quite a problem. So when I make a public version I will have to remake and delete a lot of stuff, because I have many famous people and fairy tales there.”

The potentially troublesome emojis depict specific beer brands or scenes from much-loved films. However, there are also many that show general activities popular in the Czech Republic, as well as others that point to well-known jokes indirectly.

These thoughts will have to wait however, as Ms. Juríková, a student, is facing many summer deadlines.

She is no one hit wonder either. Last year, her Slabikář syllabary book design won a number of awards and she has also illustrated a Czech-English guidebook for children titled Franny and the Monsters of Prague.

Whatever happens, Czemojis are likely to remain on Ms. Juríková’s mind: she is considering pursuing the designs as part of her Master’s thesis.