Democracy in Decline in Czech Republic 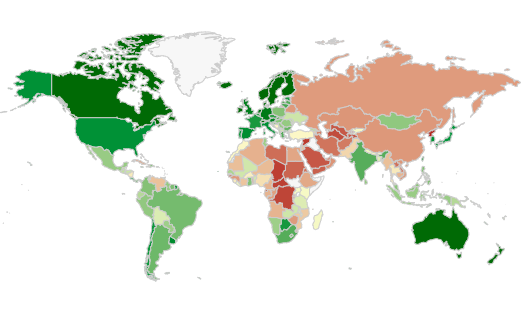 Every year, The Economist publishes the so-called Democracy Index – a measure of how countries in the world are leading in maintaining democracy. According to current data, the situation is deteriorating everywhere in the world – including the Czech Republic.

The Year of the Year was almost a disaster, according to the Economist for Democracy.

The world average index , which, on the basis of 60 indicators, assesses the political freedom on a scale of 1 to 10, has fallen most in recent years. No improvement has taken place in any part of the world.

The Economist draws attention to increasingly divided societies in developed countries, as well as limiting freedom of speech.

The index distinguishes four categories of countries: authoritarian regimes (index 1 to 4), hybrid regimes (ie those with elements of democracy and dictatorship, with an index of 4 to 6), democracy with mistakes (6-8) and full democracy (8-10 ).

The Czech Republic belonged to the last category until 2013, but since then its rating has been steadily declining.

Compared to 2016, it was down 0.2 points in the current issue. With 7.62 points, it is ranked 34th out of 167 countries surveyed. Still, Estonia has the second best result from the former Eastern Bloc countries.

The best of all is the Czech Republic from the Visegrad Four countries. Neighboring Slovakia attributed the list of authors with 7.16 points, Poland with 6.67 points and Hungary with 6.64 points.

In the attached report, they mention inter alia the controversial Polish judicial reform and the political pressure of the Hungarian government on independent media.

The best is Scandinavia

The Lead Top Rank has long been the Scandinavian countries. This year, Norway, Iceland and Sweden are the first three, followed by New Zealand, Denmark, Ireland, Canada, Australia, Finland and Switzerland. The index of democracy exceeding nine has only those ten countries.