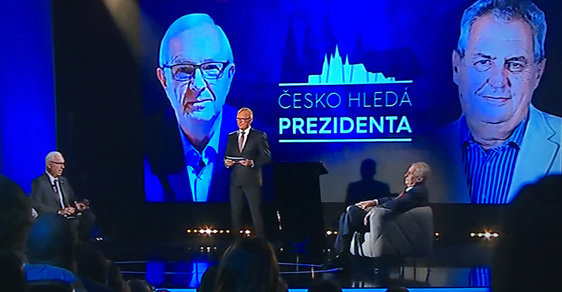 The election teams of both candidates accepted that the originally planned one-hour programme will be extended, Lutonsky said.

Compared with the first duel broadcast by commercial TV Prima on Tuesday night, the audience would be markedly smaller. Hundreds of supporters of both candidates were in the audience of the Prima duel, while CT will allow Drahos and Zeman to bring to the duel 30 supporters each.

During the Prima duel, there was tension between both camps and Zeman’s supporters booed at Drahos and shouted during the debate.

CT spokeswoman Karolina Blinkova said CT believes it would be able to guarantee a cultivated discussion.

In the first part of the duel, the presidential candidates will answer questions prepared by CT editors, Blinkova said.

In the second part, the heads of the two houses of Czech parliament and people from a selected municipality would ask them questions, and in the last, third part they will answer questions asked by their rival.

The Chamber of Deputies is headed by Radek Vondracek (ANO) and the Senate by Milan Stech (Social Democrats, CSSD).

Lutonsky told CTK that CT also addressed Prime Minister Andrej Babis (ANO) who was still deciding whether to take part in this part of the duel. Babis might ask questions, too.

Blinkova said the teams of Drahos and Zeman know topics that the questions asked in the first part would concern, but they had no influence on the selection of the topics, which include the latest political affairs, presidential powers and their programmes.

Lutonsky told public Czech Radio (CRo) that CT would ask Drahos and Zeman about their motivation.

According to CTK’s information, the debate will be broadcast from one of the small rooms of the Rudolfinum music hall in Prague.

Zeman previously said he would not take part in any debates with his challengers. But when he and Drahos advanced to the runoff, Zeman said he would appear in maximally two television debates with Drahos. Drahos agreed to meet him in two duels only.

Zeman, 73, and former Academy of Sciences head Drahos, 68, advanced from the first round of the presidential election on January 12-13 with almost 39 and 27 percent of the vote, respectively. They will fight for presidency on January 26-27.