Czech police tackle man, put him in headlock for not wearing face mask 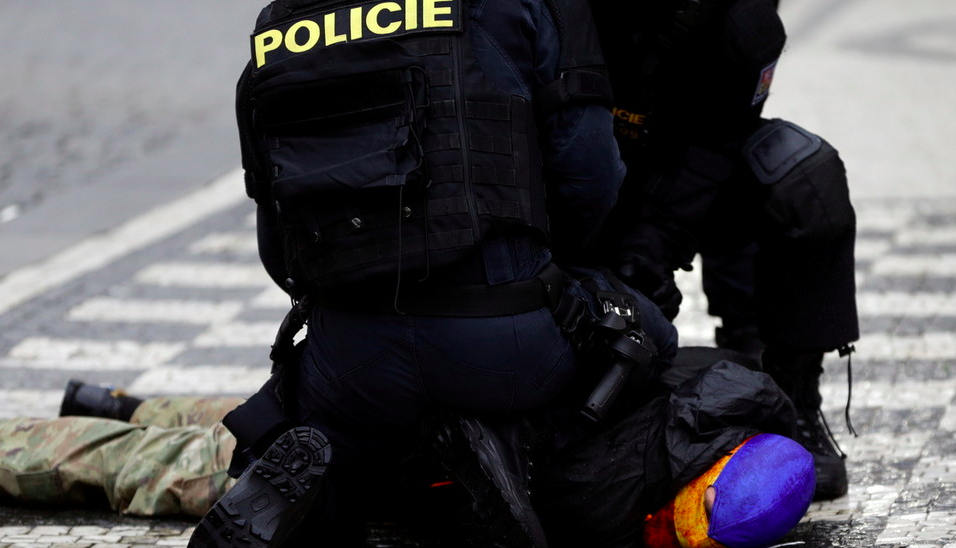 A disturbing video of police in the Czech Republic putting a man into a headlock after he allegedly refused to wear a face mask to protect against Covid-19 has gone viral and prompted an investigation.

In the clip recorded on Wednesday in Uherske Hradiste, police can be seen tackling the maskless 40-year-old man to the ground and holding him in a headlock as his frantic three-year-old son cries.

According to the Facebook post, the man had run into trouble with police after he “picked up his child from the playground” and forgot to bring a mask.

Though the video sparked widespread condemnation against the police officers involved – and led to them being taken off duty – Uherske Hradiste Mayor Stanislav Blaha partly defended the officers’ actions in a statement on Facebook, Thursday.

“When the video came to me last night I was shocked. The cry of a child, the procedure of police officers, the man on the ground,” Blaha declared. “But the video does not capture the whole story as it happened.”

Despite saying that he would probably take “a different approach” if he were in the police officers’ shoes, Blaha claimed that the man repeatedly refused to follow police instructions.

“Police officers saw a man without a mask. They challenged him to put it on. He was on the street and, even though the video looks empty, he was not alone on it… The man refused. Repeatedly,” the mayor wrote, adding that he refused to give his identity, picked up his son, and “began to move away from the police officers.”

As police followed the man, he allegedly “started pushing them away” and was then tackled.

Blaha went on to condemn “hateful comments” made by some people toward the officers following the incident. He said not wearing a mask when asked to by police is “ordinary recklessness” but that it was “equally crazy” to kneel on the man in front of a child.

An investigation was launched by Czech police following outrage on social media over the man’s treatment.