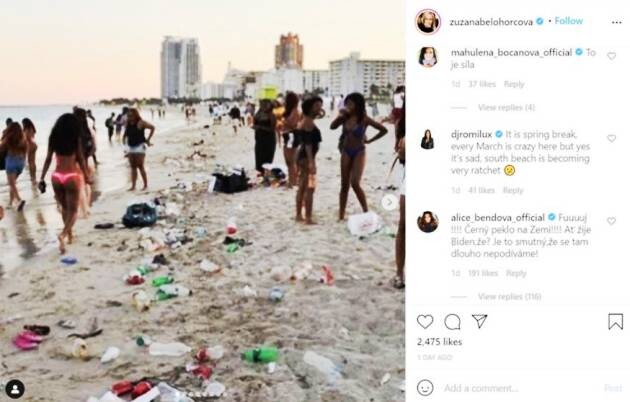 The Slovak celebrity Zuzana Belohorcová (age 45) has been living in Miami, Florida in the USA for many years and recently surprised her fans by relocating her entire family to Marbella, Spain. She recently explained one of the reasons for the move in an Instagram post.

Among those commenting on that post was the Czech actress Alice Bendová (age 47). Czech news server iDNES.cz reports that several followers of Belohorcová on Instagram have accused Bendová of racism over her comments.

Belohorcová had shared photographs and videos of a beach in Miami covered with garbage and full of people with the accompanying message:  “Many of you keep asking me why we left Miami. Here is a simple and concise answer. You don’t want to raise your children in such an environment, after all. What has been happening there recently is unbearable. From being Heaven on earth it is becoming literally a living Hell. When will the old Miami be back? That beautiful beach of ours, South Beach and Ocean Drive? It breaks my heart. The police are completely at a loss. They deserve my great admiration. To control such an unmanageable mass is a really difficult problem.”

Hundreds of comments were immediately posted by her followers in response to the photographs and videos, and Alice Bendová’s comments were provocative for many of her fellow Instagrammers. “Yuuuuuck! Black Hell on Earth! Long live Biden, right? It’s sad, we won’t be going there for a long time,” the Czech actress posted.

Another Instagrammer responded to Bendová as follows:  “What does this have to do with Biden? I don’t get you. When the Ultra Music Festival was on or when it was vacation season the same mess was there.”

“You are third-rate racist filth,” responded yet another user of the platform. “You’d better delete that comment, it’s a shame. You can’t seriously mean it.”

When the iDNES.cz news server asked the Czech actress for her response, she said she had not read the other comments but that she stands by her opinion – and rejects the accusations of racism. Many other Instagrammers expressed agreement with her views, defended her, and said they did not see her comments as racist.