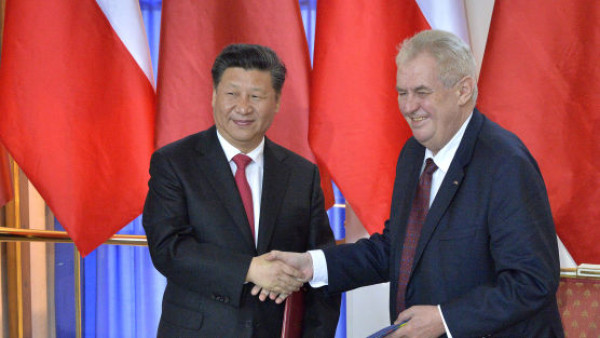 The mayor of this capital city was shaking hands down a line of diplomats when the Chinese ambassador to the Czech Republic did something decidedly undiplomatic.

He strode to the front of the line, pushing past puzzled envoys holding champagne flutes, and demanded that a top Taiwanese diplomat be asked to leave the mayor’s reception – in deference to the “one-China policy” – or he would walk out himself.

“There is only one China. I am the ambassador,” Ambassador Zhang Jianmin later recounted to The Washington Post. “I tried to point out the mistake that he made, and I advised him to correct the mistake.”

But Mayor Zdenek Hrib knew what he was doing. He had worked at a teaching hospital in Taiwan while training to be a doctor and was well aware of China’s claim on the island. He refused to accommodate Zhang’s request. “I explained to him we don’t kick out guests that we’ve invited,” Hrib told The Post.

Months later, even as Beijing is embroiled in a trade war with the United States and facing protests in Hong Kong, Chinese officials and the Czech mayor are still sparring. The feud offers an especially raw example of how Beijing is trying to flex its muscles in Europe – with little tolerance for objections.

China has been investing in Europe in conjunction with its broadly defined Belt and Road Initiative. And it has focused special attention on Central European countries.

For many European Union decisions, each country has an equal vote, meaning China needs to win over only a few leaders to nudge E.U. policy in a favorable direction.

The Czech Republic previously held China at arm’s length. President Vaclav Havel, a hero for leading Czechoslovakia out of communism, was deeply cautious about Beijing when he was in office, said Pavel Fischer, a member of the Czech Senate and a former Havel adviser.

As Havel sometimes said about China, “even an elephant will recognize the courage of a small bird and change his posture,” Fischer recalled.

But China has been able to make inroads since Havel’s death in 2011.

Zeman has welcomed Chinese investment and tried to position his country as China’s portal to Europe. He even appointed a Chinese business tycoon, Ye Jianming, as an economic adviser. Ye, the chairman of energy company CEFC China, proceeded to buy stakes in a Prague soccer team, a brewery, an airline, a media company and an investment bank.

Meanwhile, China hired former Czech ministers and other retired politicians to press its case in Prague.

“They’re trying to rearrange the political arrangements to be more conducive to Chinese interests,” said Martin Hala, director of Sinopsis, a group that studies Chinese influence in Central Europe. “Some systems are more resilient than others.”

The relationship has hit some serious bumps.

Ye, the Chinese adviser to the Czech president, has not been seen since March 2018, when he was arrested in China for unclear reasons. A top executive at Ye’s NGO, the China Energy Fund Committee, has since been convicted in a New York court for bribing officials in Chad and Uganda. And Ye’s energy company has been absorbed into a Chinese state-owned company.