Belarus security forces crack down on mass protest in Minsk 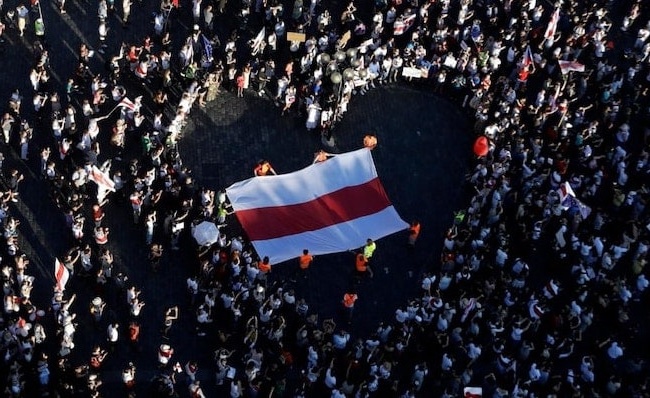 Dozens of people protesting against the regime of President Alexander Lukashenko were arrested today in the center of Minsk. Women were mainly demonstrating support of opposition leader Maryya Kalesnikava, who was detained after a failed attempt by Belarusian authorities to expel her from the country. Masked police officers intervened against them. On its Russian-language website, the BBC described the police intervention as brutal and the Russian news agency TASS as rude, even towards onlookers.

Police without identification marks took the protesters to unmarked cars. There were dozens of people, Reuters reported, referring to eyewitnesses. “They have already detained several dozen participants, both men, and women. Some are shouting, others are crying. People across the street chanted ‘Let them go,'” TASS reported, estimating the number of opposition protesters.

According to TASS, about fifty Lukashenko supporters with national flags met simultaneously on Minsk’s Independence Square. After about half an hour of chanting slogans in support of the president, the group broke up.

In Belarus, opposition supporters protest against the outcome of the August 9 presidential election, which Alexander Lukashenko said for the sixth time, this time with more than 80 percent of the vote. Opposition candidate Svdjatlana Cichanouská won only ten percent of the vote, according to authorities. The opposition, and the European Union, say the results were falsified.

Under pressure from the authorities, the Cichanous Day left Belarus for Lithuania the day after the elections. The police forced other opposition coordination council members, Pavel Latuška and Volha Kavalkovová, to flee abroad. Authorities also tried to deport Kolesnikova, along with two other oppositionists. Kolesnikova deliberately tore her passport on the border with Ukraine, so the border guards could not get her out of the country.

According to AFP, French diplomacy today condemned the “arbitrary arrests” and forced exiles that the Belarusian regime is using against opposition politicians and activists.

Kalesnikava is one of the organizers of the protests that the Belarusians have held since the August presidential elections against Lukashenko. Around 100,000 people demonstrated again in Minsk on Sunday.