Anti-Babis protests to resume in November 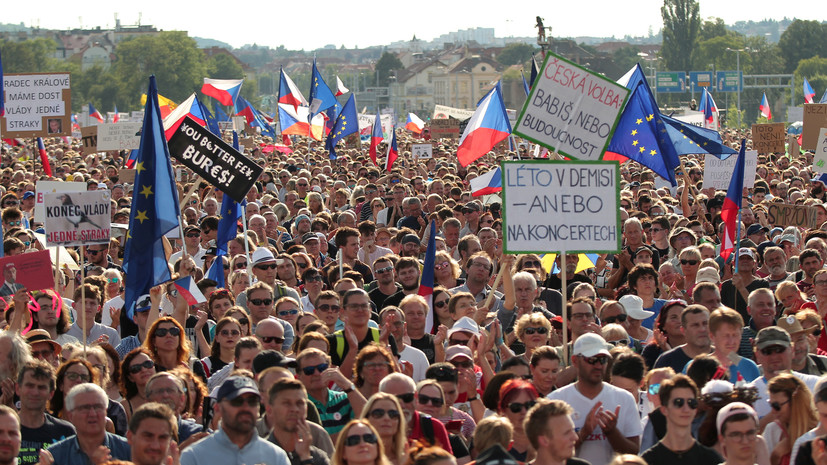 Czech protests have wound down for the summer, but organizers say the break — far from being a chance for the movement to lose momentum — will re-energize the protestors, leaving them fresh to take advantage of new ammunition expected in November.

After a season of demonstrations, one of which filled Prague’s Letna Park Plain with up to 250,000 people calling for Prime Minister Andrej Babis to resign, the summer holidays have come as something of an anti-climax.

“While I think that it’s a bit disappointing that we will have to wait until November for another protest, personally I think that at the next protest there will be even more people,” said Patricie Zidkova 15, a high school student who says that even though she cannot vote, she will do everything possible to contribute to the movement and keep up the calls for Babis to resign.

“We need to do something about Mr. Babis, because he is a person who is making the Czech people look bad,” she said, referring to allegations that Babis illegally obtained 2 million euro ($2.22 million) from subsidies meant to help small business owners. Babis has been investigated by both Czech police and the European Union Anti-Fraud Office (OLAF).

Others consider Babis’ history as a collaborator with the StB, the communist era secret police, an insult to the post-communist Czech Republic.

Babis has been under intense scrutiny since late April due to his appointment of Marie Benesova, a longtime political ally, to the position of Minister of Justice. Citing concerns of cronyism, protestors worry that Benesova would prematurely end all formal criminal investigations and clear Babis of any wrongdoing.

Denying all the allegations, Babis has called the multiple investigations into his business activities a witch-hunt.

As of mid-July, there have been no hints from the Ministry of Justice that any of the investigations against Babis will be dismissed.

Nevertheless, the decision to postpone further demonstrations until after the summer has upset some, who are fearful that the movement will lose steam.

“It bothers me that there will be such a long wait until the next protest,” said Denisa Markova 18, a Czech student who attended the protest at Wenceslas Square. “Maybe it is not so bad, because Czech people have been protesting against Babis for a long time now, so we will still be pretty mad at him.”

Yet Jiri-Jakub Zevl, one of the main organizers of the protests, has no such fears. Zevl has been taking to social media to send reassurances to fellow protestors that the movement is not finished.

“As we said during the protests, this is only the beginning,” Zevl said. “Nevertheless, we are prepared to organize again in case of more serious problems. This would mean protesting again in the summer.”

As the social media outreach coordinator for the protest organization Milion Chvilek Pro Demokracii (One Million Moments for Democracy), Zevl has been instrumental in spreading the word about both of the most recent large protests.

“Since our goals are long-term, it would be naive to think that we can protest for months in a row or more,” he said. “If we are to deserve a democracy, we must know when to take a break and remain ready to resume protests as needed. We are not afraid.”

In fact, the delays are rational, for several reasons, argues Jiri Pehe, a Czech political analyst who served as director of the Political Cabinet to former President Vaclav Havel.

“November will offer more opportunities to demonstrate,” he said. “We can expect the final audit of the European Commission on Babis’ conflict of interest case.”

More importantly, Pavel Zeman the Supreme State Attorney of the Czech Republic, will release the findings of his investigation against Babis in October or early November.

According to Pehe, the date is a coincidence of historic significance.

Referring to the mass protests that brought down the Czechoslovak party-state, he pointed out, “The decision of the state prosecutor in charge of Babis’ criminal investigation, just happens to be right before the 30th anniversary of the Velvet Revolution.”