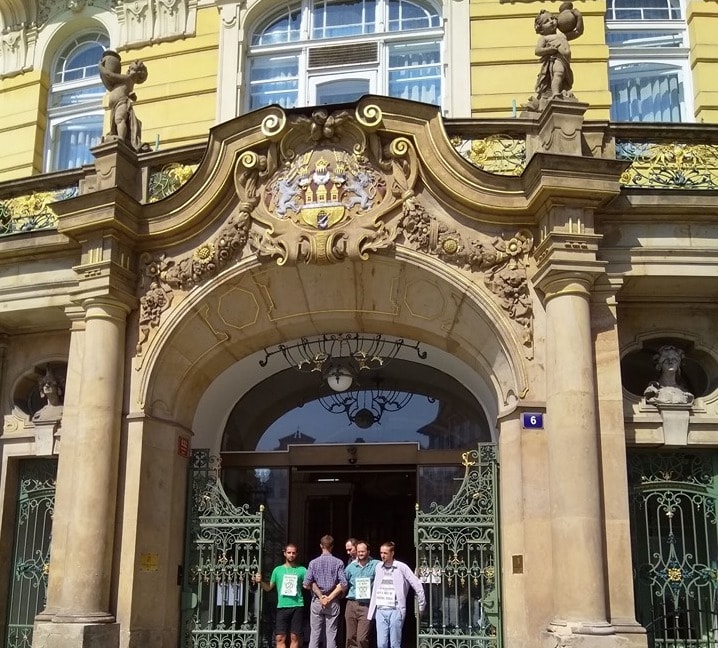 Extinction Rebellion members blocked the entrance to the Ministry for Regional Development in Old Town Square for about two hours. Activists demanded that the state immediately reduce emissions from fossil fuels and achieve carbon neutrality in 2025, a state where the amount of emissions produced and destroyed is in balance. The Ministry for Regional Development is a member of a coalition commission set up by the government, which will deal with the decline in coal mining and the structure of energy production.

The four activists with a “Rebel for Life” banner blocked their bodies into the ministry building at approximately 11:50 am. According to CTK, the protest was accompanied by minor verbal disruptions with the Office’s employees who had to leave the building through the side entrance to Parizska Street. One of the protesters was taken by the police after spraying the front door. The remaining participants ended the blockade shortly after 13:30.

Activists call on the government to act and to adequately support energy savings and the development of renewable resources. “It is not necessary to stop burning fossil fuels altogether. However, we need to achieve carbon neutrality, which implies a total emission reduction of about 75% in order for nature to cope with more greenhouse gases than we create,” Extinction Rebellion said in a press release.

The movement suggests setting up authorities to propose measures to reduce greenhouse gas emissions and extensive landscaping. According to the activists, it should be democratic assemblies with representation of all groups of citizens. “These assemblies, unaffected by political influences, are better able to gain broad support for adopting unpopular but needed long-term solutions,” the movement said.

Coal power plants are an important source of fossil fuel emissions in the Czech Republic. According to the July decision of the government, a special commission will deal with the reduction of mining of this raw material and the structure of energy production. The body, which will meet for the first time on Monday, will have 19 members from ministries, state offices and industry, trade union and environmental organizations. According to a previous statement of the Minister of the Environment Richard Brabec, the commission could present its fundamental outputs at the end of next year.